Planetary Radio Q and A: What's Jupiter made of? Part 2

This week's Planetary Radio features Don Yeomans on a new website that helps to inform the public about the potentially hazardous asteroids in the space near Earth. On "Questions and Answers" I continued answering the question:"I've heard Jupiter called a 'failed star' because it's made mostly of hydrogen. What is it made of, other than hydrogen?"

My answer is taken in large part from a fine astronomy textbook, The Cosmic Perspective, by Bennett, Donahue, Schneider, and Voit: 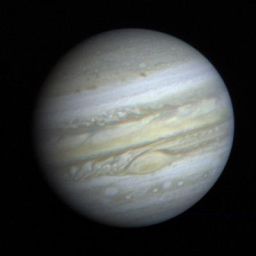 This image of Jupiter was captured on January 9, 1979 by Voyager 1, 54 million kilometers (34 million miles) from a March 5 closest approach.
Last week I answered a question about the composition of Jupiter, and explained that its upper atmospheric clouds were made of materials familiar to us on Earth because similar temperatures and pressures prevail there. But the story is quite different deep inside the planet. Jupiter is about 11 times Earth's diameter and contains almost 300 times as much matter. All that mass means that the planet has an intense gravitational field leading to incredible pressures within it. At the same time, Jupiter retains some of the primordial heat of its formation, and is also heated inside as it continues to contract, converting gravitational potential energy into thermal energy. If you descended half an Earth diameter below the clouds, you'd find the pressure to have increased to half a million bars, and the temperature to 2000 degrees Celsius. At that level, the dominant element within Jupiter, hydrogen, acts more like a liquid than a gas. Go down to a depth of one Earth, and pressure and temperature squeeze hydrogen to the density of water and make it behave more like a metal. Go down to a depth of a little more than four Earths and you'll finally get to Jupiter's core. The core is made of hydrogen compounds and also the elements that make up rocks and metals, but with a pressure of a hundred million bars and a temperature of twenty thousand degrees, none of these materials behaves anything like their counterparts do on Earth. The core probably churns so violently that all these materials are mixed together, rather than separating into layers of different composition. Jupiter's core is a little less than twice Earth's diameter and probably contains ten times Earth's mass, so if you could somehow take its atmosphere away, you'd still have quite an impressive planet.