Here's a little piece of eye candy for you. There is a canonical shot of Uranus taken by Voyager 2 as it departed the system, showing the apparently serene blue orb as a thin crescent: 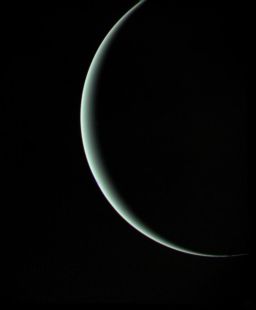 This view of Uranus was recorded by Voyager 2 on January 25, l986, as the spacecraft left the planet behind and set forth on the cruise to Neptune. Voyager was 1 million kilometers (about 600,000 miles) from Uranus when it acquired this wide-angle view. The picture -- a color composite of blue, green and orange frames -- has a resolution of 140 kilometers (90 miles) per pixel.
At around the time that Voyager 2 snapped the images for that photo, it also captured images of all five of Uranus' major moons. The combination of low light and high phase angle made the crescent moons so incredibly dim that they are really difficult to find on the Voyager image frames; check out my earlier two posts on the Voyager Uranus image catalog (part 1 and part 2) and see if you can pick out the crescents from the instrument noise and dark current. It's tough.

Any time there's a gnarly old data set, image processor Ted Stryk has typically had a go at it. Here is his version of those five crescent moons. From left to right, they are Oberon, Titania, Umbriel, Ariel, and little Miranda. This photo won't win a beauty contest, but it's a view of these tiny dark worlds that almost no one has really seen before. 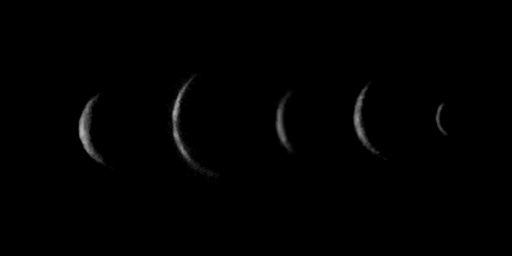 As Voyager 2 departed the Uranus system on January 26, 1986, it turned back to point its cameras at Uranus and its five major moons. At such a high phase angle, very little light was reflected from the moons to Voyager's camera, so their images were almost lost among background noise. Heavy processing was required to bring their slim crescents into view. They are, from left to right, Oberon, Titania, Umbriel, Ariel, and Miranda.
This seems as good a place as any to post the content of an email that I received in February, just after I wrote those other two posts about what we know about Uranus' moons. In the post, I commented, "I realized that most of the sources I was looking at for caption material consisted of scientists' first impressions of these worlds. Has anybody been studying any of them recently? Has the science changed at all from those first impressions?" In response, Darin Ragozzine (a planetary astronomer at Caltech) told me that, indeed, there has been some recent interesting work on the satellites of Uranus. He wrote:

Not long after the Voyager encounters, in the late 1980's, dynamicists (mostly William Tittemore, Jack Wisdom, Stan Dermott, and Renu Malhotra) did a study of the Uranian satellite system to try to explain what was going on. In particular, some of the satellite surfaces were not primordial or were just plain weird (e.g. Miranda). But most interestingly, the inclinations of the satellites had Miranda sticking out like a sore thumb with an inclination of 4 degrees, an order of magnitude more than the other moons and unusual for any of the regular satellites of the outer planets. They were able to explain Miranda's inclination and some of the resurfacing events through models the dynamical evolution of the system [that is, how the orbits of the moons have shifted with time as they interact gravitationally with each other and Uranus].

Due to the tides from Uranus, the major satellites are moving outwards (just as our Moon is moving away from the Earth). Kepler's third law says that the size of the orbit is related to the orbital period, so this tidal evolution changes the orbital periods of all the satellites in different ways. Occasionally in this evolution, two of the satellites will cross a resonance (e.g. one satellite going around exactly 5 times when the other goes around exactly 3 times). These resonances powerfully affect the orbits and, combined with continued tidal evolution, can create Miranda's inclination and can also create eccentricities that lead to internal tidal heating and resurfacing. This isn't a recent result, but I thought it was pretty cool that the dynamical model does an excellent job of reproducing Miranda's anomalous post-resonant inclination, without a lot of parameter tuning.

The second interesting thing going on with Uranus right now is that the satellites are undergoing mutual events. (This is similar to the situation with the KBO I've been working on, Haumea, see haumea-namaka.blogspot.com). This is described on the Armagh Observatory website and there are a few recent (2007 and 2008) scientific papers that talk about some of the observations, and, in one case, modeling. They haven't gotten to the point where they'll use all the observations to refine the masses, radii, etc. of the system, but I would expect new updated physical properties of the Uranian moons in the next few years. I think it's also true that some of these event light curves will give us crude albedo properties of regions of the satellites not seen by Voyager.

Along these same lines, there's a recent observation of a stellar occultation of Titania that improved the error bars on Voyager's measurement of its radius by a factor of 3 and also put a pretty strong upper limit (10-8) atmospheres!) on any tenuous atmosphere that could exist (this limit shows that Titania does not have a Pluto-like atmosphere, which is at the 10-6 atmosphere level). The main author gave a presentation at the Division of Planetary Sciences meeting last fall (for which there is video) if it interests you. Looking at the abstract, I didn't realize that they were also able to constrain the size of the giant star that was occulted. Cool!

Anyway, just a few thoughts for someone interested in the Uranian moons. Although we aren't flying there anytime soon, we can still learn about the system through clever observations. Clever indeed. Thanks, Darin!