This will be one spectacular Saturn mosaic when it's assembled properly

Among the many images recently posted to the Cassini raw images website from near the equinox were numerous frames from a ginormous multi-filter 19-frame mosaic on Saturn and its rings. This one is really unusual because the ring system shadow has collapsed to the barest skinny line across the globe, and because the rings are so incredibly dark. It was taken a little more than a day following equinox so it is technically the first mosaic captured by Cassini in which the northern face of the rings is "sunlit," but the angle of the sunlight is still so low as to be almost negligible. I did my best to put the frames together to give you a sense of what the mosaic will eventually look like, but the dynamic range is enormous (very dark rings, very bright planet) so there was only so much I could do to match the levels of adjacent frames. I can't wait to see the official version of this one.

This mosaic is composed of 19 frames captured by Cassini through an infrared filter on Saturn and its rings on August 12, 2009, a day after the equinox. The shadow cast by the rings onto the planet is a very thin line. We are looking at the northern face of the rings, on which the Sun is rising for the first time in nearly 15 Earth years. This mosaic was assembled from raw images, which contain a number of artifacts, so it was impossible to match the levels of adjacent frames.
It's fun to compare the composition to this one, taken early in Cassini's mission. Note the bright ringshine reflecting onto the southern hemisphere on Saturn's night side. No ringshine in the above mosaic either, but there's planetshine on the rings. 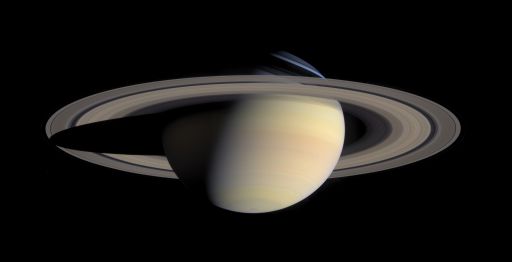 Most detailed view of Saturn yet

This grand image of Saturn and its ring system was taken by Cassini on October 6, 2004, on its long first orbit of the planet. Cassini pointed to 42 separate targets over a period of two hours, taking three images at each location, to make this massive mosaic, which is more than 8,800 by 4,400 pixels in size. Cassini was moving so slowly at this point in its orbit that the images did not need to be altered or reprojected in order to be tiled into this grand mosaic.