The Earth from the Sky, and the Sky from the Earth

Here's an unusual view of our home planet:

Earth and the Moon from Chandrayaan-1

Chandrayaan-1 captured this view of Earth from the Moon on July 22, 2009. The image is not from the orbiter's camera; it was captured by the Moon Mineralogy Mapper (M3), a spectrometer contributed to the Indian mission by NASA. M3 is designed to map lunar minerals in infrared wavelengths, which are longer than the human eye can see, so the photo is "false color." Australia is visible in the lower center of the image. Oceans appear as dark blue, clouds are white, and vegetation an enhanced green.
Chandrayaan-1 has taken photos of Earth from the Moon before, and pointed at Earth on July 22 particularly so that its camera could see the shadow of the Moon pass across Asia during the total solar eclipse. You can see those camera images here. The image above, though of lower quality in terms of spatial resolution, is special because it was taken with a spectrometer, an instrument whose function is to map the Moon with high spectral, not spatial, resolution. The fact that the Moon Mineralogy Mapper can resolve features on the surface of Earth, which is more than 3,000 times farther from the spacecraft than the targets that the instrument is really intended to study, boggles my mind. Spectrometers aren't really supposed to be cameras; they sacrifice the ability to resolve detail in order to slice the incoming light into its component wavelengths and measure how strongly a surface reflects or emits light at each wavelength. Yet here Chandrayaan-1 is with a spectrometer that's acting like a camera. Congratulations to the M3 team on what's obviously a very capable instrument.

And, of course, it's always cool to look back on Earth through the eyes that we use to study other worlds. I've added the photo to my "Earth as seen from planetary spacecraft" page.

And now to look up at the sky from below, I am pleased to post a link to an epilogue to last year's marvelous "Stars Above, Earth Below" travel blogs by Tyler Nordgren, in which he invites you along to "Come See the Milky Way from Glacier Point." 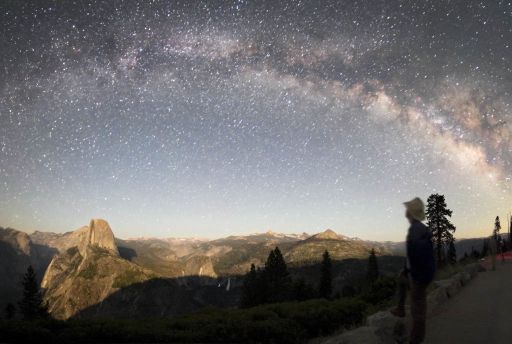 The Milky Way from Glacier Point in Yosemite National Park. Moonlight still illuminates Half Dome and the high Sierras beyond. While the colors of the Milky Way are only visible in long exposure photographs, most of the detail is visible to the naked eye if you take the time to look.