Big Picture and other good links for today

This week, the Boston Globe's "Big Picture" feature is on Cassini images, and the selections are marvelous choices (though I'll note the guy who's selecting the images seems to be particularly fascinated by the weird shots where you see rings appear to bend as they are refracted by the uppermost, transparent regions of Saturn's atmosphere). That guy is Alan Taylor, who's worked on a number of other interesting Web projects over the years. Here, for instance, is a neat image he put together containing all known bodies in the solar system larger than 200 miles in diameter (which needs to be updated with a couple of new names for TNOs). Not everything on his site is space, though; it seems one of his first projects was the Baywatch official website, then hosted on Compuserve! Awesome. Anyway, because of Taylor's preference for ringmoon and weird ring effect images (which are, admittedly, spectacular), there are fewer images of icy sats than I probably would have selected if I were running through the same exercise. So here's one of my faves, of sunlight glinting across the peaky landscape of Tethys. 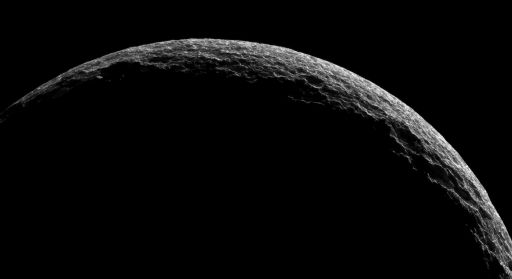 Cassini captured this extremely high-phase view across the limb of Tethys on June 29, 2007. The extreme lighting geometry makes the battered, icy surface sparkle. In many places, the shadowed interior walls of craters are lit by sunlight reflected off of the opposite walls.
And now for something completely different: like The Big Picture<, the satirical weekly newspaper The Onion often features space stories, too. This week's is absolutely classic: "NASA Embarks On Epic Delay." I've been having an impossible time choosing a favorite line from the article -- just go read it.

If you're an amateur astronomer, you'll know about this one: early tomorrow a thin crescent Moon will be occulting Venus (for viewers in western North America); even if you're not in a position to see the occultation, the conjunction of Moon and Venus should be gorgeous. But you'll have to get up early -- the occultation will happen from 5 to 6 a.m. local time here in California. More details at Science@NASA and Sky & Telescope. If you want to get up even earlier, you might catch some shooting stars from the Lyrid meteor shower.