Learning about the little things beyond Neptune by studying binaries

The April 2009 issue of Icarus just came out; this is one of the main journals in which you'll find peer-reviewed reports on the most recent work of planetary scientists. One of the papers in this month's issue that incited my interest was by a team of astronomers led by Will Grundy of the Lowell Observatory, and concerned the "Mutual orbits and masses of six transneptunian binaries."

Why is this paper interesting? For starters, I think it's pretty amazing whenever anyone can say anything specific about the nature of a trans-Neptunian object. These things orbit (by definition) beyond Neptune, in the most distant reaches of our solar system. But unlike Neptune, they are very tiny and very dark, making them exceedingly difficult observational targets. To discover them and track their orbits around the Sun requires fairly big telescopes. To learn anything more about them than how bright they look and where in space they move requires the one of the world's greatest telescopes -- in the case of this study, only Hubble would do. 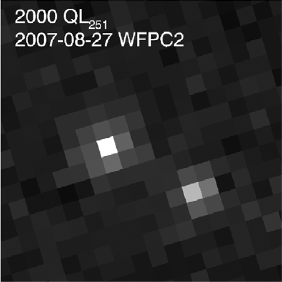 Hubble photo of a trans-Neptunian binary

Even the Hubble Space Telescope can't resolve the tiny denizens of the Kuiper belt into disks. But if the objects are binary, like 2000 QL251, Hubble observations can help astronomers determine the masses and other properties of the two members of the binary system.
Previous Hubble observations of the six trans-Neptunian objects (which I'll abbreviate "TNO" for brevity's sake) in this study had yielded the key discovery that each actually consisted of not one but two objects, locked in mutual orbits. The Hubble surveys actually found that quite a lot of known TNOs are binary -- something like 11 percent of them, in fact. But whether a TNO is likely to be binary depends in part on where in trans-Neptunian space the TNO orbits. If a TNO has an orbit that's kind of like a planet's -- not too elliptical and not too inclined -- then it's considered part of the "classical disk" and is MUCH more likely to be binary. TNOs that have more elliptical, more steeply inclined orbits are part of the "scattered disk" and are much less likely to be binary.

This is consistent with the story that astronomers currently tell about how TNOs got to where they are in the solar system now: it's assumed that most TNOs started out with classical orbits, lying in the plane in which the planets orbit. But some TNOs have suffered close encounters with other TNOs, or gravitational disturbances from migrating planets, and were scattered out of their original, classical orbits into their present elliptical and inclined ones. The same gravitational interactions that can change an orbit so dramatically could also tear apart former binary companions, leaving the scattered disk with more lonely objects.

Binary systems are pure gold to astronomers. If you can measure the shape of their mutual orbit, you can determine the masses of the two bodies; and then, with some reasonable assumptions, you can determine all sorts of other parameters, like their sizes and albedos -- information that would otherwise be unavailable for such dim, distant objects.

Grundy and his coworkers had to take four to six separate photographs of each TNO at different times to pin down the orbits of the two bodies in each binary system. Most of the paper details the statistical way that they determined the orbits of the bodies. The information about the orbits allowed them to determine the two bodies' masses. Since the likely density of these objects falls within a pretty narrow range (from 0.5 to 2 grams per cubic centimeter, which takes you from internal compositions of porous ice to much less porous ice mixed with rock), they could use the derived masses to get an estimate of the plausible range of diameters and albedos. Here's some basic orbital information and derived details for the six binary systems they studied:

That's a lot of numbers. What conclusions can we draw?

First, consider the sizes of the orbits. The orbits are pretty tight -- of the six systems, four of the derived orbits would fit completely inside Earth (which has a radius of about 6400 kilometers), and the remaining two aren't a whole lot larger. A good way to consider how tight the orbits actually are is to compare their size to the Hill spheres of the primaries -- roughly speaking, the Hill sphere is the volume of space over which the primary has more gravitational influence over the secondary than the Sun does. The paper's authors did this calculation and found that all of the orbits have semimajor axes smaller than 2% of the radius of their Hill spheres, which are very tight orbits indeed. This probably reflects the chaotic history of this part of the solar system -- with lots of bodies wandering around in different-shaped orbits, it's been common over the age of the solar system for bodies to have close encounters, during which gravitational interactions could cause a binary companion to get tossed out of its system. You're less likely to lose your companion if you hold it tighter, so we should expect that, at present, most of the binary systems left out there would be pretty tight ones.

What else? The astronomers also found that the orbits (with one exception) had very similar eccentricities (which means the orbits had similar elliptical shapes). However, they weren't quite sure what to make of this observation -- they said it "may offer another useful constraint on possible formation scenarios, but we are not aware of any published binary formation mechanisms which produce eccentricities clustered in this range." And, of course, "the sample is likely to be biased in various ways and may not be representative of the distribution of eccentricities among [trans-Neptunian binary] systems in general."

The derived albedos are interesting. The four systems in the middle of the table are all part of the classical disk, and were all found to have higher albedos of at least 0.1. This isn't brightly reflective -- we're not talking icy moons here -- but it's much brighter than any comet we've visited with a spacecraft, and it's brighter than the two scattered objects in the study, which do have more comet-like albedos. This apparently isn't the only study suggesting that classical-disk objects are relatively reflective -- there's another Icarus paper in press, based on observations from the Spitzer space telescope, suggesting that classical objects really are generally brighter. That, in turn, means that the classical disk contains less mass than previously thought. And that, in turn, means that people who think about how the solar system formed may need to rejigger their models.