Mars' outer moon Deimos is an underappreciated sibling to the larger, closer, and much-better-mapped Phobos, so I was delighted to see today that the sharp-eyed HiRISE camera on Mars Reconnaissance Orbiter recently captured two lovely color images of Deimos. Without further ado, here they are. Just to be different from the bajillion other space bloggers who'll likely post these photos today, I've rotated both of the images so that the north pole is up and the equator is (roughly) horizontal. 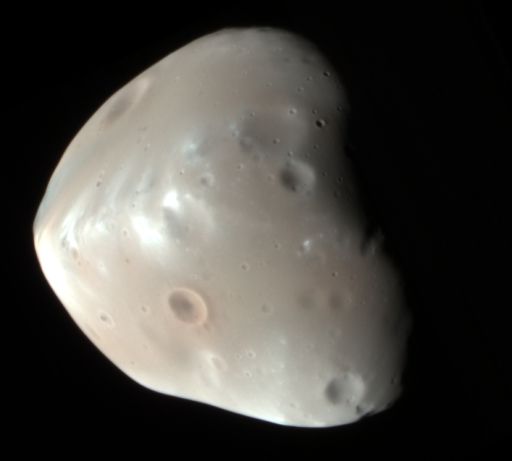 The HiRISE camera captured these enhanced-color view of Mars' smaller and outer moon Deimos on February 21, 2009. The view is of the hemisphere of Deimos that always faces Mars. Since Mars Reconnaissance Orbiter circles Mars at an altitude of about 300 kilometers, while Deimos orbits at 20,000 kilometers, it's the only face of Deimos that HiRISE will ever see. The images have resolutions of about 20 meters per pixel. They have been rotated so that the equator is roughly horizontal, with north up. The two images show the same point of view; they differ in lighting geometry because they were taken five hours and 35 minutes apart.
Deimos is relatively poorly studied because all modern Mars spacecraft orbit at altitudes much lower than Deimos' 20,000 kilometers. Since Deimos, like nearly every moon in the solar system (including our own), is tidally locked to its planet, that means that all orbiters see only one face of the moon, the "sub-Mars hemisphere," and that at a great distance. Phobos orbits much closer to Mars (at 9,400 kilometers), which is still above the altitude of the circular, polar orbiters like Mars Global Surveyor, Odyssey, and Mars Reconnaissance Orbiter, but it's below the apoapsis of Mars Express, and is now being well mapped from all sides.

One indicator of how little attention has been paid to Deimos is the number of place names that have been formally approved for it. Are you ready for the complete map of all named places on Deimos? Here you go: 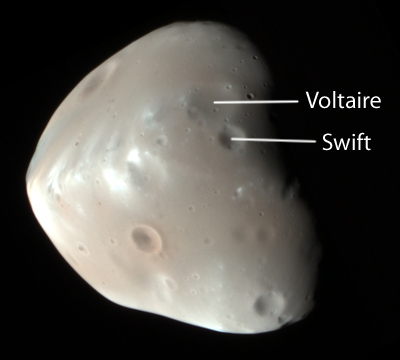 As of the date that the HiRISE camera imaged Deimos (February 21, 2009), only two craters on its surface had yet received names.
For more fun with Deimos, here's a link to my earlier post on Chuck Clark's cut-and-assemble model of Deimos; here's views of both Phobos and Deimos from CRISM, the imaging spectrometer on Mars Reconnaissance Orbiter; and here's some random space facts on Phobos and Deimos from Bruce Betts.