EDIT: Thanks to Jay Pasachoff for correcting me -- it's the Sun's photosphere, not corona, that makes the brilliant diamond on the ring.

And thanks to Daniel Fischer for pointing out this video sequence of the Earthrise, of which the image I show below is a still. Cool!

JAXA and NHK just released this lovely shot of an Earthrise taken by Kaguya during a penumbral lunar eclipse, when Earth blotted out almost all the light from the Sun except for one tiny edge of the Sun's disk. The sunlight peeking over the edge of the disk at about 4:00 makes the brilliant "gem" on the "diamond ring" -- the ring is, I believe, Earth's atmosphere, scattering sunlight forward to the camera. 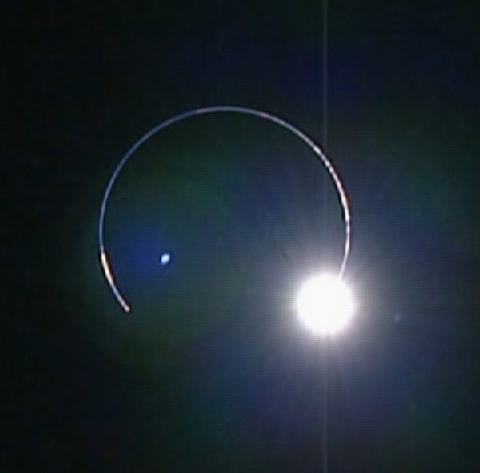 On February 10, 2009, Kaguya witnessed a simultaneous Earth- and Sunrise, with the Earth mostly blocking the spacecraft's view of the Sun. The result is this lovely "diamond ring" image, where Earth's bulk is slightly offset from the Sun's disk, allowing a tiny sliver of the Sun's photosphere to peek over the lower-right edge of Earth's disk, shining as a brilliant point of light.
Here's a slide from a Japanese-language presentation (I'm not sure what the occasion of the presentation was), which shows how the edge of the lunar disk is blocking part of the view of the diamond ring, and also, at lower right, the geometry of the observation. 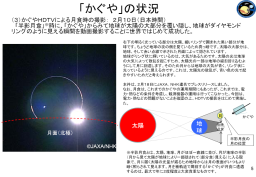 This presentation slide explains (in Japanese) the geometry of the "Diamond Ring" Earthrise photo captured by Kaguya on February 10, 2009.
FYI, the same presentation includes a map showing the location of the impact of the Okina satellite: 200.967E, 28.213N, or a little north of the equator near the center of the lunar farside. It also contains the news that Kaguya's own lunar impact is expected to take place in June of this year. Thanks to "Subaru" on unmannedspaceflight.com for the tip!