Jupiter may have a "super-Earth" at its center

This story has been lying in my inbox since Thanksgiving, but that doesn't make it any less interesting. The results of a new computer model developed by Burkhard Militzer and four coauthors suggest that deep inside the solar system's largest planet sits an inner rock-and-metal core the mass of 14 to 18 Earths, surrounded by an envelope of ices of methane, ammonia, and water, surrounded by an atmosphere of mostly hydrogen and helium containing few ices. Essentially, the model says that Jupiter = Neptune with a whole lot of hydrogen and helium around it.

This makes intuitive sense -- you'd expect that, out in the outer solar system when things started forming, anything that was the mass of Jupiter would have had to pass through some stage where it had only as much mass as Neptune or Uranus, so it would have had some moment in its formation history when it looked a lot like Neptune or Uranus (compositionally anyway; when all this stuff was happening, the planets were probably a lot hotter, so they may have looked quite different). The reason this is news is that we have no good way to "see" what's going on deep inside Jupiter, so the only way to learn anything about what it looks like there is to do these sort of computer models; and past computer models have suggested that Jupiter had a core that was much smaller, smaller than seven Earths, and maybe that it had no core at all. Which makes little intuitive sense, but what can you do if that's what your models tell you? 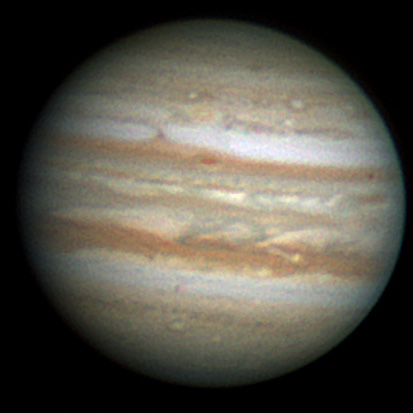 I asked the first author of the paper to explain how his model was different from his predecessors'. He said that the main difference had to do with how they modeled the behavior of the hydrogen and helium in Jupiter's deep interior, where temperatures and pressures reach extremes that are totally unreachable in experimentalist's laboratories. They basically wrote down mathematical equations that describe the behavior of individual hydrogen and helium atoms, calculating from the infinitesimally small to arrive at the state of an entire planet.

Another difference has to do with assumptions made about the structure of the deep interior. According to Militzer, previous models assumed a change in the composition of the Jovian atmosphere with depth; his model is actually simpler, assuming no compositional change, only calculating how the state of the hydrogen and helium change with depth. In the paper they find that the transition from the upper mantle, in which hydrogen is molecular (as it exists on Earth), to the lower mantle, in which hydrogen is in a metallic state, is a gradual one.

Finally, their model satisfies the observed shape of Jupiter only if Jupiter doesn't rotate as a solid body. Instead, they predict that it rotates more like it's composed of a series of concentric cylinders, with the outer cylinders (reaching Jupiter's equatorial regions) rotating faster than the interior cylinders. This is the same way the Sun's rotation appears to work.

This paper isn't just important for Jupiter; until we understand the state and history of the giant planets in our own solar system, it'll be hard to say for sure if we understand anything about extrasolar planetary systems, more of which are being discovered every year. And whether or not Jupiter has a rocky core at all is profoundly important for figuring out how planetary formation kicks off in the first place.

Can this model be tested? It's hard enough to be sure what's going on deeply inside Earth -- how can we hope to measure Jupiter's deep interior? The paper closes with the statement that "New observational data for Jupiter are expected from the NASA mission Juno. This low-periapse orbiter will return unprecedented data on gravitational and magnetic fields during 2016. It may present the first direct evidence of deep interior zonal flows in Jupiter proposed here."

The paper was "A Massive Core in Jupiter Predicted from First-Principles Simulations," in Astrophysical Journal Letters, by Burkhard Militzer et al.