Saturn and Tethys, in color

Eye candy is a great way to start the day. I spotted the images necessary to make this mosaic on the new-and-improved Cassini raw images website last week but after struggling for a little while to assemble even a couple of them into a coherent picture with sensible-looking color, I gave up. Fortunately there are others on the Internet who are more persistent than I; in this case it's Ian Regan who rose to the challenge and created this really lovely view of Saturn and its rings at low phase, with Tethys peeking over the edge of the image at left. Pretty! It's kind of enthralling to watch the slow, inexorable march of the advancing seasons on Saturn, using the shadow cast by its rings on its globe as a sort of a season sundial. 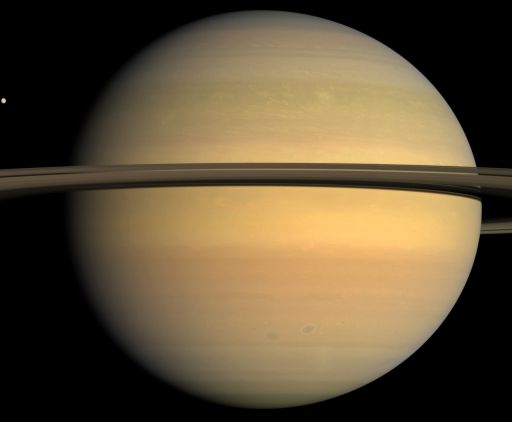 Saturn's globe (and Tethys too)

Cassini captured numerous images of Saturn through red, green, and blue filters on January 18, 2009, which Ian Regan assembled into this lovely true color mosaic. Close to its equinox, Saturn is almost fully lit, with the shadows of its rings making just a very narrow band near its equator. The bright icy moon Tethys lies near the edge of the picture to the upper left.
If you navigate to the Cassini raw images page and are wondering how it has improved -- it hasn't changed a whole lot -- the answer is that when you search for images it now shows 36 thumbnails per page instead of just 16, making browsing far more efficient. The new site is still going through some growing pains (in fact it seems to have gone down while I was writing this blog entry) but they're being very responsive to feedback.