When I first posted my asteroids-and-comets-to-scale montage in preparation for Rosetta's encounter with Steins last August, I got lots of email. Several people suggested I add in Mars' moons Phobos and Deimos, likely captured asteroids; a couple people said I really needed to sign it digitally, since it was going to be reproduced and I ought to get some credit; and a bunch of people said, please, make it a poster! Well, thanks to Eric Hartwell, your various wishes are my command.

After making this year's Year in Pictures Calendar for sale on Cafe Press he suggested that we set up one of the pages as a poster, and I knew which one to pick. Eric had added Phobos and Deimos (dragging me kicking and screaming -- the pedantic pigeonholer in my head says those are moons, not asteroids, but they do fit well in the size range of the montage, and who am I to argue with what people want?), and he also colorized the images. It's at a glorious 35 by 23 inches (89 by 58 cm), and contains Mars' moons Phobos and Deimos; Astereoids Mathilde, Ida, Dactyl, Eros, Gaspra, Annefrank, Steins, Braille, and Itokawa; and comets Halley, Borelly, Wild 2, and Tempel 1; and, to provide a sense of scale, the International Space Station, CN Tower, Empire State Building, Eiffel Tower, and Mount Fuji. If you'd like to see it at its full resolution (or surreptitiously print it on your large format printer at work), Eric put it on Flickr too. But if you buy it for $24.99 from Cafe Press, you'll be sending seven bucks to the Society. 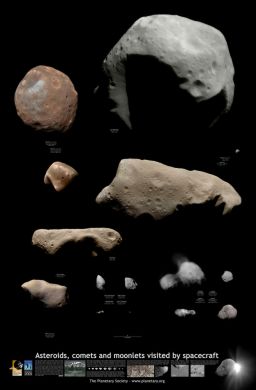 Poster produced by Eric Hartwell for The Planetary Society.