More images and data from Chandrayaan-1

Chandrayaan-1 has been in orbit at the Moon since November 8, and is steadily returning data from its science instruments. The "Images from Chandrayaan-1" page at the Indian Space Research Organisation has been updated a few times over the last several weeks with new images from its Terrain Mapping Camera and HySI camera, while the headquarters of the Moon Mineralogy Mapper (M3) at Brown University has also posted its first data. The M3 team does a good job of explaining how the M3 instruments builds up "image cubes" as it flies around the Moon -- check it out!

Most of the image releases at ISRO are from the Terrain Mapping Camera, which actually consists of three individual cameras. The three cameras are pointed in different directions: one is pointed directly down, below the spacecraft ("nadir"); one is pointed down and forward along the spacecraft's orbital path ("fore"); and one is pointed down and backward ("aft"). All three cameras capture images of the same places on the Moon, but their different perspectives cause features appear to shift due to parallax. That's nicely illustrated with this example of a small crater from the far side of the Moon, as imaged by the fore, nadir, and aft cameras.

It's the same crater in all three pictures, but the position of its floor appears to shift because of the difference in height between the lunar plains and the bottom of the crater. The Chandrayaan-1 team uses these images to build up information on the topography of the lunar surface; it's the same way that the HRSC instrument on Mars Express is being used to make 3-D images of Mars.

Representing 3-D images on a flat computer screen is always problematic. ISRO has released two types of images that attempt to show you what the Terrain Mapping Camera can do. One way is to make an "anaglyph," a single flat image that encodes 3-D information some how. Most anaglyphs on computer screens are red-blue anaglyphs, for which you need a pair of red-blue 3D glasses. If you have such a pair of glasses, you'll be able to see lovely topographic detail in the image below, of craters and volcanic channels. 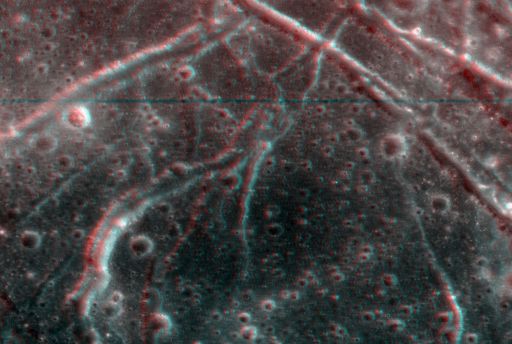 Wear a pair of red-blue 3-D glasses to see the topography of this cratered and channeled lunar surface.
I try not to post red-blue anaglyphs very often, because they're inaccessible to people who don't have the proper eyewear handy. (The glasses are very cheap to obtain -- you can order them from lots of places online, get them in some kids' 3D books, or even make them yourself -- but, speaking for myself at least, it can be hard to keep them around. My toddler is constantly putting mine on and running off to a mirror to pronounce herself "Looking good!" It's amusing but leaves me without 3D glasses most of the time.) So here's another way to see 3D images: ISRO takes the originals, develops a digital terrain model, and then drapes the nadir image (the one taken looking straight down) over the digital terrain model to make a simulated view of the three-dimensional terrain, usually with significant vertical exaggeration. The Moon is not really this lumpy, but the exaggeration allows you to see subtle undulations in the plains. 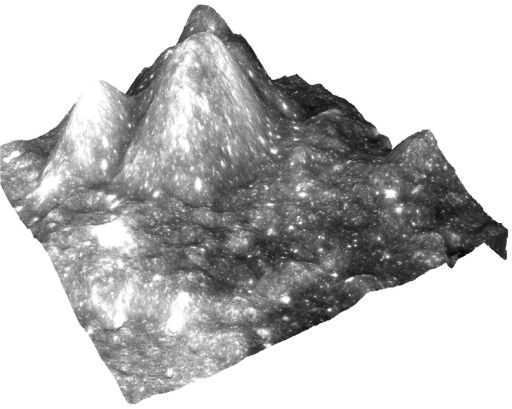 ISRO isn't offering much in the way of caption information on the images, so I can't tell you anything about their scales or their locations, and I can't really compare them to previous digital terrain models. In particular, I'd like to know how the Chandrayaan-1 topographic information compares to what's being developed by the Kaguya team using their laser altimeter (LALT). In general, though, a laser altimeter gives you fantastic information on the global topographic characteristics -- which places are highest and which places are lowest -- but the topographic maps you can make from laser altimeter data aren't particularly high-resolution. The sort of terrain mapping that's being done with the Chandrayaan-1 camera gives you much higher-resolution topographic information in smaller areas. Kaguya also has a Terrain Camera; its cited resolution is about 10 meters per pixel, while Chandrayaan-1's is 5 meters per pixel. So, in theory anyway, Chandrayaan-1's lunar topographic atlas should have a resolution that is a factor of two better than Kaguya's. We'll see what develops as both these spacecraft map the Moon!