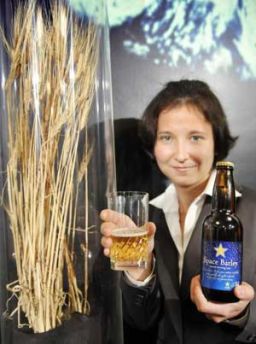 On December 2, the Sapporo brewing company unveiled "Space Barley," a beer brewed from barley descended from barley grains that spent five months aboard the International Space Station in 2006. Sapporo only brewed 100 liters of the space beer. As of the date of these images, Sapporo had no plans to sell the beer, and had announced no specific plans for distribution. 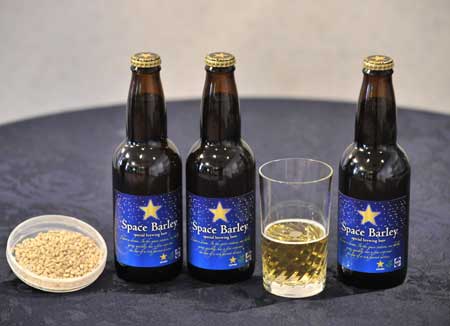 I found an International Herald Tribune story explaining the history of the barley that has become this precious 100 liters of beer. Apparently biologists at Okayama university worked with Russia, and one of their experiments involved flying 0.9 ounces (that's 25 grams) of barley aboard the space station from April to September 2006. The article states that "The project is part of biological studies of the adaptability of plants to environmental changes and the impact from stresses such as space travel." After their return to Earth, 0.14 ounces (that's 4 grams) of the barley were given(?) to Sapporo, who planted them at a research farm in March 2007. By November, the seeds -- apparently none the worse for wear for their journey in space -- had produced a third generation (that seems fast to me! but a quick Google search shows that barley can reach physical maturity in between two and three months, so it's reasonable), which yielded 100 pounds of barley, which Sapporo has now brewed into beer.

I want some. It's apparently not for sale though.