Here is the first image taken by Chandrayaan-1 of the Moon, taken while it was still in Earth orbit on November 4. It's a bit underwhelming -- until you realize that the camera was designed to take photos of the Moon from a distance 3,000 times closer than this. 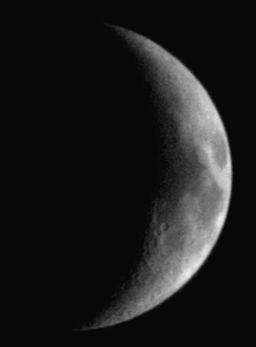 Chandrayaan-1's first image of the Moon

While still in Earth orbit (and very nearly at Earth's distance from the Moon, 311,200 kilometers away), Chandrayaan-1 snapped its first photo of its eventual target, the Moon. The camera was designed to take images from an eventual 100-kilometer science orbit, so this photo has a resolution more than 3,000 times poorer than Chandrayaan-1's science images will have. As the mission progresses, more photos should become available on the ISRO website.
Apart from the low resolution of the image there's also a pixelated nature to the gray levels, particularly obvious near the terminator (day-night boundary), that suggests to me that the exposure was set a little short, so they had to crank up the brightness quite a bit. This may be due to the fact that the Moon is in a crescent phase; at this high phase angle, a smaller fraction of the Sunlight that strikes the surface is reflected back to the observer than there would be if the Moon were fuller-phase.

It may not be an impressive image but it's a milestone, and there is hopefully much more to come.