Chandrayaan-1's journey to the Moon is going smoothly. A press release issued today by the Indian Space Research Organisation stated that Chandrayaan-1 has completed the first of many maneuvers that will transfer it to lunar orbit over the coming weeks. Its initial orbit, with a perigee of 255 kilometers and an apogee of 22,860 kilometers, had about a 6.5-hour period. While at perigee this morning it fired its engines for 18 minutes, raising its apogee to 37,900 kilometers, and increasing its orbit period to 11 hours. The update concludes by stating that "All systems onboard the spacecraft are functioning normally. Further orbit raising maneuvers are planned in the coming few days." Indian news media are posting somewhat varying information on when exactly Chandrayaan-1 will reach lunar orbit, but I think it's supposed to be ready to do science early next month.

Here's a launch video, from the Associated Press:

And the mission has posted several very fine photos of the launch to its photo gallery (thanks to Nancy Atkinson for pointing me there). You have to scroll past the prelaunch testing pics to get to the launch pics. 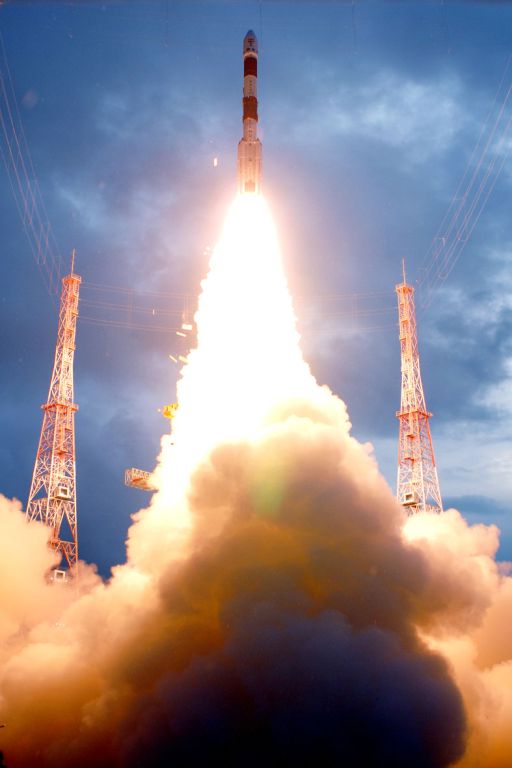 Chandrayaan-1 lifted off for the Moon aboard a Polar Satellite Launch Vehicle (PSLV) at 00:52 UTC on October 22, 2008.
There's a bunch more neat launch photos at the blog of the student chapter of the Astronautical Society of India.