Another year, another Europlanet. This time it's in the northwest German city of Münster, at the Westfälische Wilhelms-Universität (that's the University to you and me). It's a stunning venue, somewhat compromised by the large tent erected to house the poster sessions. 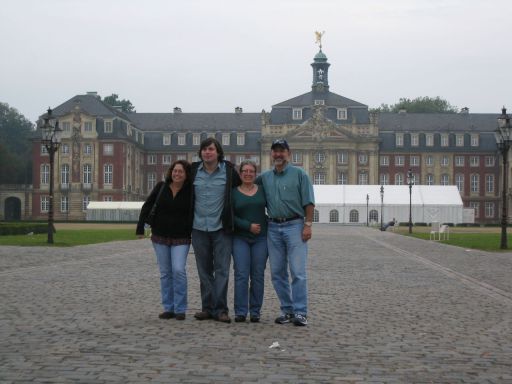 From left to right: Veronica McGregor, from JPL's public information office, and the voice of Phoenix on Twitter; Doug Ellison; Jane Houston-Jones, outreach specialist for the Cassini mission; and Kevin Hussey, from JPL's image processing laboratory, at the EPSC Venue, 2008.
For the first time, Europlanet had an opening ceremony, lasting about an hour. In brief, various organizers of Europlanet said "Welcome to Europlanet", the Mayor of Münster said "Welcome to Münster", and then one organizer said "Stick to the Schedule". In the spirit of sticking to the schedule, I'll move on.

As you will have heard Emily and me both lament from conferences before: until we figure out how to clone ourselves, we can only see on session at a time. Europlanet this year runs five sessions concurrently, so four-fifths of the content immediately flies out the window. Because of that, and because of my bias toward presentations on subjects that find interesting and I think I can blog about, I would urge you to review the abstracts at the EPSC Website. Two-page abstracts abound, and in some cases cover every ounce of information that will be presented in the oral presentations anyway. I'm going to try and pick one or two presentations each half-day, and blog those. On Wednesday are the Outreach sessions, in which I'm presenting on the outreach done by the Mars Exploration Rover team that the amateur community has leveraged into what I call