Phoenix update to sol 97: A new sample for wet chemistry and lots of fun with animations

It's time to catch up with the latest on the Phoenix mission at Mars, now more than a week into its extended mission. As I post this, we're a few hours in to sol 99. When I last checked in, Phoenix had spent a couple of weeks grooming trenches and preparing for sample deliveries. This week, they've delivered one sample to the Wet Chemistry Laboratory, tested out a new delivery method for getting an ice-rich sample into TEGA, and opened another set of TEGA doors. They've also done some neato imaging of the sky, and taken an interesting set of observations of that "Holy Cow" icy area under the lander very close to midnight.

Before I go on, it's probably a good idea for me to post an updated version of the work volume map; the only addition to the map I posted last week is Golden Goose 2.

The Phoenix 'work volume' as of sol 96

In the week prior to sol 96, Phoenix continued to prepare the Stone Soup and Snow White trenches for sample deliveries to MECA and TEGA, respectively. On sol 95, Phoenix scooped a large sample from the deep Stone Soup trench, called Golden Goose 2, and delivered it to the MECA Wet Chemistry Laboratory. A test sample was taken from Snow White; the next week should see a TEGA delivery.

The base panorama consists of images captured on sol 84.
Here's an animation of the delivery of the sample, called Golden Goose 2, to the Wet Chemistry Laboratory. It went into cell #3, the outermost. There's only one cell left in the Lab, cell #2 -- I am not sure why they skipped over cell #2 to deliver to cell #3.

Delivery of 'Golden Goose 2' to MECA

On sol 96, Phoenix dropped a scoopful of soil onto the open hopper of the outermost of Phoenix' four Wet Chemistry Laboratory cells. The first image in this animation was taken on sol 90 and shows the empty hopper. The second shows the full scoop of soil, taken from the Stone Soup trench, poised over the Wet Chemistry Laboratory. In the third image, the soil has been dumped. The last two images were taken from closer in, and appear to document the behavior of the dumped pile as the sample drawer was closed, delivering the soil sample to the waiting beaker.
On sol 94, they tested the acquisition and delivery of a sample from Snow White to TEGA, by grabbing it and then dropping it on one of the already-used TEGA ovens, oven 0 (the one with the wide-open doors). They did take images of the test, but I'm not bothering to post an animation here because after squinting at the photos for a while I couldn't convince myself that I saw any change between them other than the movement of shadows; I didn't see any obvious evidence of soil falling onto or into the oven. If you want to judge for yourself, visit my robotic arm camera raw images page and check out the relevant images from sol 94 -- I think the image numbered "1AF0" is pre-delivery, and the two numbered "1AF3" are post-delivery.

I haven't heard anything from the mission about how they think the sample delivery went. In any case, they went ahead and opened another set of TEGA doors, the fifth to be opened, oven #1. The oven 1 doors opened the same way that 4 and 7 did -- one door opened completely, the other door partially. They've already demonstrated that they can get a small sample through doors opened in that configuration. Maybe it's time for a map of TEGA, too. 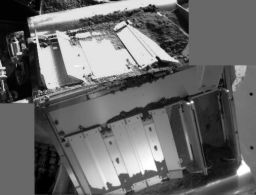 The TEGA instrument as of sol 96

On sol 96, the doors were opened over TEGA oven 1 in preparation to receive a new sample, possibly an ice-rich one. This mosaic of two robotic arm camera images taken on sols 85 and 96 documents the current status of the instrument. The upper half of the instrument (as seen in this mosaic) includes, from left to right, ovens 7, 6, 5, and 4 (the last one is only partially visible). Three of these have been used; only oven 6 is still closed. The bottom half of the instrument includes, from left to right, ovens 3, 2, 1, and 0; ovens 3 and 2 remain unopened. To date, the only doors that have opened correctly and fully are those over oven 0. Ovens 1, 4, and 7 had one door open partially and one fully. Oven 5 had both doors open partially. Despite the door opening problems, the TEGA team has succeeded in getting samples inside every open oven, except the most recently opened one.
OK, so on to the interesting atmospheric stuff. This one is cool and also educational: a movie of clouds flowing across Phoenix' sky. The rovers have also captured cloud movies, but I don't recall any with clouds this puffy. There are more clouds in the sky because it's the peak of summer, or just past it, and the sun beating down on the northern polar cap has increased the amount of water vapor in the northern polar atmosphere.

Phoenix took the 10 frames that compose this animation between 14:52 and 15:02 local solar time on sol 94. The camera was gazing slightly to the west of south, so the clouds are moving westward or west-northwestward. Ice clouds have become more common in Phoenix' sky as the summer sun causes water to sublime from the northern polar cap; the summer's maximum abundance of atmospheric water vapor was recently reached at the Phoenix site.
There was more fun to animate on sol 94, from the wind experiment. First, let me post a much older animation of the top of the meteorological mast, which carries a tiny weight mounted on a Kevlar string. It blows back and forth in the wind on Mars. A tilted mirror below the telltale shows which direction the wind is blowing, and how far the telltale has been blown off of vertical; it also shows the sky color directly above the mast, and as you can see, it's darker than the color of the sky closer to the horizon (same as it is on Earth, for the same reason; near the horizon, there's a longer path through the atmosphere, more space along which air molecules and dust can scatter light and make things look brighter). Note that if the telltale is being deflected toward the east, as it is here, then the wind is out of the west.

In this five-image animation from sol 3, the telltale at the top of the meteorological mast waves in the Martian wind. The wind appears to be a bit gusty, blowing from the west.
Lately, most of the telltale images have been cropped much more closely around the waving weight. This achieves much greater efficiency in terms of data volume, which is really important for this experiment, because each observation consists of numerous images. But on sol 94, the images were a bit too closely cropped -- the wind has blown the weight right out of the field of view! Things seem to be getting gusty around Phoenix. However, I can't be sure it's any gustier than usual. It's quite likely there have been other telltale movies in which the telltale has blown as far, it's just that this time its motion was all in the plane of the image (to the northwest). If the telltale had extreme motion perpendicular to the plane of the image (i.e. to the northeast), the gustiness wouldn't have been nearly as obvious.

Phoenix frequently captures many images of the "telltale" atop the meteorological mast in order to study wind speed and direction at its landing site. The 64 images in this animation were captured over the course of about an hour near local noon, and document some of the largest excursions yet observed for the telltale, some of them right out of the image frame. The telltale is generally being blown toward the north and northwest, indicating winds coming from the south at that time of day.
Finally, I'll mention that overnight on sols 96-97, Phoenix tucked its arm between its legs and studied the site called "Holy Cow" overnight, as the Sun wandered from west to east along the northern horizon (nearly behind the camera in this view). I don't have any particularly intelligent interpretations to state about this imaging sequence; I just think it's cool.

Phoenix parked its arm in position to peek underneath itself at the site called "Holy Cow" over the night of sols 96 to 97. For all of the images, the Sun was above the horizon, but near midnight the Sun was nearly behind the camera, making the shadows nearly disappear.
As usual, I've updated the sol-by-sol summary and the robotic arm camera raw images page.