Hats off to the team that drives the Atomic Force Microscope within Phoenix; on sol 69 they finally achieved an image of a Mars dust particle, showing details of its shape as small as 100 nanometers across. I pointed before to a neat Phoenix Diary written by Tom Pike (you have to scroll down to the August 1 entry) on the struggles they have been going through to get the Atomic Force Microscope to work -- it's terribly challenging. I'll also point out that there is no mention of the Atomic Force Microscope in Phoenix' mission success criteria, because it really wasn't obvious they would succeed. But they did! Here's the proof: 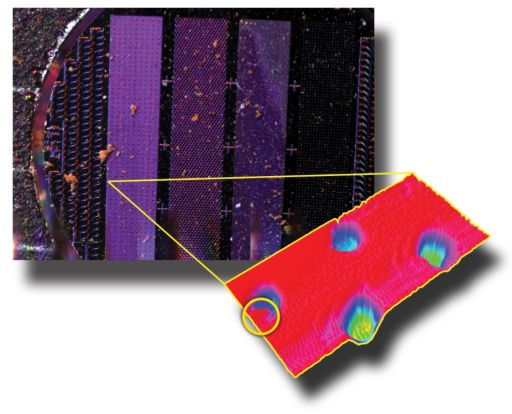 First Atomic Force Microscope image of a particle from Mars

The Atomic Force Microscope within Phoenix' MECA instrument uses fine silicon needles to trace out the topography of particles of Martian dust, developing a three-dimensional map of the particle's surface that reveals details as small as 100 nanometers across. (This is one ten-thousandth of a millimeter, and about four times smaller than the shortest wavelength of light that the human eye can see.) The particle is sitting inside a micromachined "well" within the Optical Microscope instrument. Four wells are visible in this AFM image; only one, the leftmost, contains a particle. The particle came from the Sorceress sample from the bottom of the Snow White trench on sol 38, some of which was delivered to the Wet Chemistry Lab, and some of which was delivered to the Optical Microscope. The Optical Microscope image is the large one; the red, detail view is from the Atomic Force Microscope.
So hooray to the team and to the instrument's builders, from the University of Neuchatel, Switzerland. But some of you -- well, most of you -- may be looking at that roundish thing in the sample well and saying, what the heck does that tell us, was it really worth all that trouble?

That roundish thing is one bit of Mars dust. And dust, despite the perjorative connotations of the word (there's another problem of scientific semantics for you), is actually a really important substance in the study of Mars. Dust is literally everywhere, on every rock and every bit of ground, on Mars. It's also always in the atmosphere. The winds of Mars lift up the dust, carry it all over the place, drop it, lift it up again, and so on. That process has homogenized Mars dust --that is, it's pretty much the same everywhere. It also means that at any given time, there is lots of dust floating around in the air. That dust in the atmosphere plays a really big role in Mars' climate, just as the other atmospheric constituents, like carbon dioxide, do.

To study Mars' climate and weather, you build a mathematical model. For the gaseous components of the atmosphere, all you really care about are their abundance and their temperature. But you have to know a lot more about particles to understand how they contribute to weather. You need to know their abundance and their temperature. But particles have a size distribution -- some are big and some are small. Small ones heat up and cool faster than big ones. Shape is also important. Flat-shaped things stay lofted in the atmosphere more easily than round-shaped things. Among the many things we don't know yet about Mars dust are the distributions of sizes and shapes of the particles. And we don't know how those sizes and shapes relate to composition. All of these factors play important roles in climate.