Wow, I'm going to have a lot to talk about tomorrow during my Ustream chat!

At about 7:15 my time a great many more of the Enceladus flyby images hit the Cassini raw images website. I've put all the remaining Skeet Shoot images on this page, and a few of the images from the subsequent 8-frame mosaic, but I ran out of steam; there's a lot of images to go through! So not everything has yet been posted on the page.

Here's my favorite image I've seen so far. There's just so much going on in it. 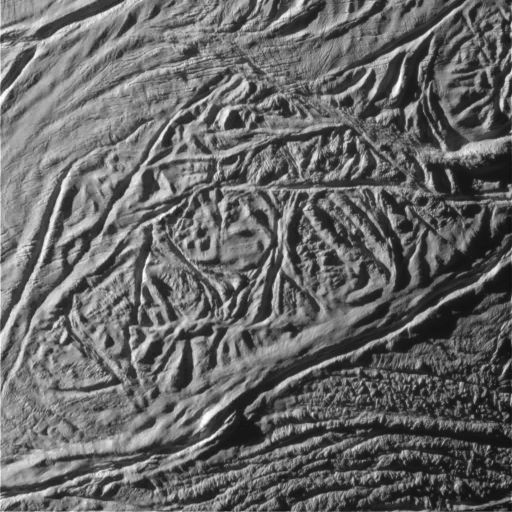 Cassini took this image through a clear filter from a range of 6,872 kilometers on August 11, 2008. It is from "frame 2" in the 8-frame south polar mosaic.
Up in the upper center, there are two intersecting splays of fine fractures, dicing up the Enceladan terrain into little squares. Toward the bottom of the frame, there is a double ridge cutting across the frame -- I think (but am not sure) that this is Baghdad Sulcus -- and it looks an awful lot like a Europan double ridge (although not as straight), complete with a little smoothish "moat" along one of the edges, wiping out the preexisting terrain. There's all the wonderful jumbledy folded tectonized stuff in the middle. And then, on the extreme right edge -- what the heck is that?! Here's a slightly different view, exposing more of this odd feature. It's a weird, steep-sided, round-topped lump sitting on top of the terrain -- compare the length of the shadow that it casts to the other shadows in the image. 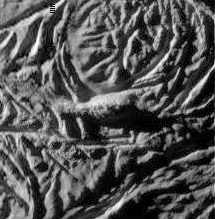 Cassini took this image through a green filter from a range of 8,966 kilometers on August 11, 2008. It is from "frame 2" in the 8-frame south polar mosaic and shows a weird lump rising high above the surrounding terrain.
That's all the time I've got for analysis right now, sadly -- I will have to examine these more tomorrow!

I'll just leave you with a reminder of what Europa looked like. Compare and contrast! (Thanks to Björn Jónnson for the pointer to this one.) 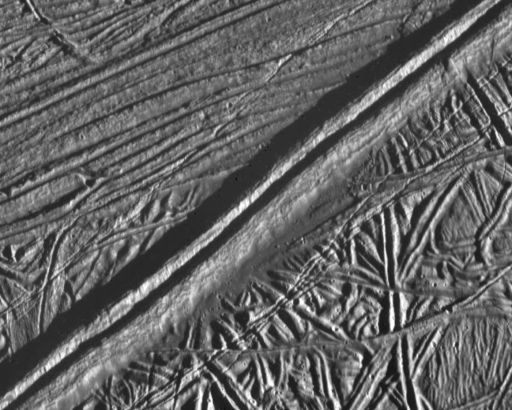 Galileo captured the images for this mosaic of ridges on Europa on Feburary 20, 1997. The image covers an area about 14 by 17 kilometers in size, and includes a 2.6-kilometer-wide double ridge, with a trough in the center, apparently cutting across earlier sets of double ridges.