I've been pursuing some writing and planning projects today so didn't have time to post much. However I wanted to note that the Phoenix team appears to have attempted today the difficult operation of squeezing a sample into the barely-open doors of TEGA oven 5. They have in the past expressed confidence that they could get something inside, and it now appears they were confident enough to try. We're looking at TEGA from the mast-mounted camera; oven 5 is on the opposite side of the TEGA "rooftop" from SSI, so it's not a good view of the oven door, but you can see a lot of soil piled up at the roof peak, which would be near the widest part of the oven door gap. 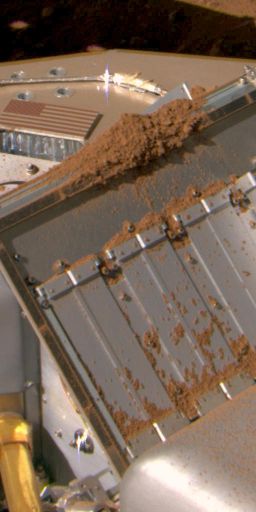 Delivery of sample to TEGA oven 5 on sol 72

On sol 72 (August 7, 2008), Phoenix dumped a soil sample into the partially open doors of TEGA oven number 5.
Mark Lemmon's raw image tracking site says this sample is "RR3." Since MECA saw a perchlorate signal in a near-surface sample taken from a spot called "Rosy Red," it seems reasonable to assume they have grabbed another sample from the same location to test in TEGA. No word yet from the team on whether TEGA successfully shook a bit of sample into its oven. Stay tuned!

As a reminder, here's a "before" picture of the door opening attempt. This one was taken by the robotic arm camera, looking down on the sloping "rooftop" of TEGA.

Two images were taken of the TEGA instrument on sol 25, before and after an attempt to open the doors of oven number 5, adjacent to oven number 4, which had been opened previously and used for the first sample.