What's up in the solar system

Because of Phoenix I've been unable to get to my weekly roundup of solar system activities. Here's an abbreviated version, just to check in on the activities of the last two or three weeks.Cassini is very, very close to the end of its primary mission. On Wednesday, May 28, it performed its last targeted flyby of Titan in the primary mission, setting up a series of very fast orbits, one every 7.1 days (or, conveniently, just about one per week). Apoapses have been happening on Thursdays and periapses on Sundays. Cassini is spending Wednesday evenings through Sundays on the northern (unlit) side of the rings and Mondays through Wednesdays on the southern (lit) side of the rings. This situation will prevail until the next targeted flyby of Titan on July 31. The fast, steep orbits mean there aren't many close encounters with moons planned. The geometry means that the latest raw images have (outside of that Titan flyby) mostly been of rings and of Saturn's poles, but there was one nice distant encounter with Janus. Image releases included some great stuff from the RADAR team on Titan (see here and here), and a beautiful map of Dione from the Imaging team.

On the surface of Mars, it is late autumn in the southern hemisphere (Ls 81°), sol 1,571-2 for Spirit, sol 1,551 for Opportunity, and sol 9-10 for Phoenix. Spirit is still parked on the edge of Home Plate, in the same position it has occupied since sol 1,464 (February 15), with its solar cells pointed northward toward the winter sun. Opportunity finally started roving again last week. Once they were okay with roving with the arm unstowed, they now face the other half of the challenging situation Opportunity was in, roving out of a little sand trap. They seem to be making some progress with that, but are not out of the dust yet.

I don't have enough time to check in with the Mars orbiters; I'll just say there's a lot of Martian beauty to be seen from the Mars Odyssey and Mars Reconnaissance Orbiter missions. There haven't been any new releases from Mars Express mission since I last checked.

At the Moon, Kaguya released some neat stuff taken over the Apollo 15 landing site, unfortunately only in Japanese so far. And they posted the lovely new image below, of a crescent Earthrise. I haven't seen anything from Chang'e 1 lately, but I send my thoughts and condolences to China for the horrible tragedy of the Sichuan earthquake. And I wonder, will I be in Los Angeles when a similarly big one hits here? It's only a matter of time. 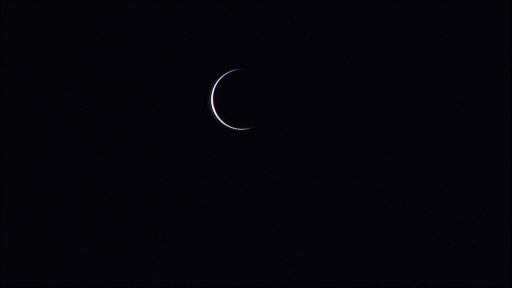 Kaguya shot this lovely view of a crescent Earth, its thin atmosphere backlit by the Sun, on April 19, 2008. 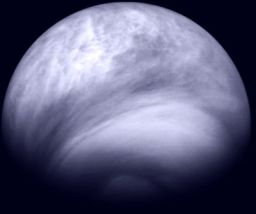 Venus' southern hemisphere in the ultraviolet

Venus' cloud patterns are at their most impressive when viewed in ultraviolet wavelengths, as in this Venus Express image from July 2007. A vortex surrounds the south pole, at the bottom of the image, while the clouds break up into fragments at lower latitudes, near the top of the image.
At Venus, Venus Express is currently in orbit. They released a few more images last week, including the one at right.MESSENGER is cruising toward its second encounter with Mercury on October 6, 123 days away. It is 199 million kilometers from Earth and 117 million kilometers from Mercury. They have recently released a couple more images, of Kertész and Atget craters, both within the Caloris basin.

I'll also mention, while we're in the outer solar system, that recent Hubble photos have shown that Jupiter has yet another new red spot.

And that Deep Impact, as part of its EPOXI mission to study extrasolar planets, has acquired this lovely image of Earth and the Moon from a pretty impressive distance, 50 million kilometers (or one third of an astronomical unit). 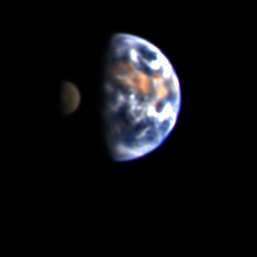 Deep Impact view of Earth and the Moon

Deep Impact took this photo of Earth and the Moon together as a part of its EPOXI extended mission, a search for extrasolar planets. The color image was snapped from nearly 50 milion kilometers (30 million miles) away on May 29, 2008 at 06:40 UTC, at a time when the Moon was transiting Earth as seen from Deep Impact.
Voyager 1 and 2, Dawn, Hayabusa, Rosetta, and Stardust are all in cruise mode, talking to Earth from time to time; Genesis is in hibernation.

Oh, and I almost forgot: there'll hopefully be a new space telescope entering orbit before next week. The Gamma-ray Large Area Telescope, or GLAST, is currently scheduled to launch on June 8 at 11:45 am EDT. There'll be further information on NASA's websites but my favorite place to look for launch photography is Ben Cooper's website. You can get up-to-the-minute launch information at Spaceflightnow. Just after I posted this item, I learned from Ben that the launch has been posted indefinitely. He said, "The range is refusing to allow a waiver on a rocket issue, for both GLAST and Jason.