Today was the last of the daily press briefings following Sunday's landing of the Phoenix mission; they said they won't have another one until "at least Tuesday." Which is good for me, because I really need a break; and on Monday and Tuesday I'm attempting to give two remote presentations to the upcoming American Astronomical Society / Astronomical Society of the Pacific meetings taking place in St. Louis. At least one of those might be on Ustream; see Star Stryder for more on that.

My various Google gadgets tell me that the weather at the Phoenix landing site yesterday had the same minimum and maximum temperatures as the last several days, but that there is more dust; and that, as I write this at 2 pm my time, it's only 10:30 am at the Phoenix site. Phoenix' days are beginning to slip later and later. Pretty soon, its afternoon downlink of images will no longer happen at a time of day when I am still awake; instead of checking for new images before I go to bed, I'll have to get up and look for them first thing in the morning.

I had a tough time following today's press briefing because I attempted to watch it online but the feed quality was very poor. I'll do my best to summarize what I could catch (with some help filling in the gaps from the folks at unmannedspaceflight.com).

They're still in the instrument characterization phase, in which they're checking out the performance of their instruments, and it seems that they've hit their first snag. One of the instrument teams, for the Thermal and Evolved Gas Analyzer or TEGA, is working on an anomaly: TEGA head William Boynton reported that it looks like they have an intermittent short circuit in one part of their instrument, the ion source. He said, "We are working on some diagnostic patches to send up in the next few days. We are optimistic that we have some workarounds that will allow us to operate the instrument with nearly the full capabilities." TEGA was probably going to be the first instrument to receive a soil sample, but they probably won't want to touch any soil until they've figured out how to work around the short circuit, so it appears that the Microscopy, Electrochemistry, and Conductivity Analyzer (MECA) is now going to get the first chance at a sample.

They showed a graph of about 15 minutes' worth of data from the meteorological instrument, in which you could see that the sky started out clear but a dustier puff of air blew over the lander's head. That was neat, but even neater is that in the time right before they took that data, the camera shot an animation sequence of the lidar's laser beam turning on. Here's my animation of that data. (This was Doug Ellison's idea. Now, though, as I write this, I notice that NASA just posted a version of this animation. I'm posting my version anyway, since I went to the trouble of making it!)

On sol 3, Phoenix' camera watched as the meteorological instrument beamed a laser toward the sky to examine the quantity of dust in the atmosphere. The laser light source is within the small cylinder at the center of the animation, and its light can be seen scattering off the interior of the cylinder as it turns on and off.
While I'm posting animations, here's another neat one of the wind telltale. It's strange, but seeing this tiny motion of a little wind vane really brings home to me that Phoenix is sitting within an active environment. Mars isn't dead; it's very much alive, with active climatic and geological processes, and Phoenix is sitting up there near the north pole feeling the wind gust across it. Cool, but I'll bet it makes a lonely sound, whipping past the meteorological mast.

In this five-image animation from sol 3, the telltale at the top of the meteorological mast waves in the Martian wind. The wind appears to be a bit gusty, blowing from the west.
Want some history on the surprisingly difficult challenge of developing a passive weather vane for Mars? Visit the University of Aarhus website.

Another topic of conversation at today's press briefing was this view of the terrain under the lander, captured by the robotic arm camera. 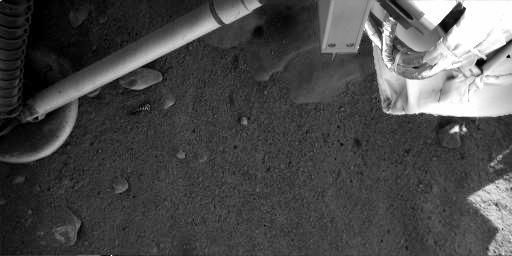 On sol 4, Phoenix used its robotic arm to examine one of the lander footpads, which cannot be imaged by the mast-mounted camera. In the same observation, it observed a strange platy texture in the ground below Phoenix. It is not yet known whether these plates are ice or rock. Their smoothness might suggest ice, but they look superficially similar to "duricrust" exposed at the Viking 2 landing site.
If you look at the top center of the image, you can see that the descent jets have exposed what look like some overlapping, lobate plates of material. It is tempting and thrilling to think this might be ice, the very substance Phoenix was sent to Mars to study. However, it could just as well be "duricrust," piles of dust cemented by magnesium and sulfur compounds that form when water from beneath the surface is wicked upwards and evaporates, leaving its minerals behind. Duricrust is common across Mars, and was visible at the Viking 2 landing site. This fact was noted by Ray Arvidson, lead scientist on the robotic arm, who also noted that it was he who took the Viking 2 image I'm posting below -- he's been around a while! If I'd had a better connection to the conference I'd've asked what that springy thing was on the ground to the right of the footpad, but I didn't get the chance.

Viking 2 image of its landing site

This image was captured by Viking 2 on August 1, 1976, 12 sols after landing. It is posted as a reminder of what "duricrust" looks like on Mars.
So the plan for the next sol is to do more detailed study of those platy things, and also to take a detailed set of images of one of two possible future digging sites in the workspace. One of the two possible sites is the area labeled "Humpty Dumpty" on yesterday's map, but they didn't say (or at least I didn't hear) if that's the site they're planning on imaging. We'll see when those images come down late tonight.