Want to know what time it is for Phoenix? If you use iGoogle there are now two different "Google Gadgets" you can use. Simon Porter's Mars Sundial gives you Mars Time Coordinate (MTC, like UTC for Earth), solar longitude (a measure of the season, explanation here), mean local solar time, and solar elevation for Phoenix, Spirit, and Opportunity. It doesn't have sol number yet but Simon says he's adding that. A. Hecht's gadget gives you sol number and local time for Phoenix. The two clocks differ very slightly for some reason, but both are telling me that as I post this shortly after noon in California, it's about 10:30 at Phoenix' site, and probably about time for it to get started for the day's work.

Today's was the first press briefing conducted primarily from Tucson, and the first that I did not attend in person. Fortunately I have DirecTV, so I could watch on NASA TV, and in one way it's better than being in person, because my DVR let me pause Mark Lemmon when he talked too fast to write down the interesting stuff he had to say about the images. But I'm getting a bit ahead of myself.

Barry Goldstein started things by updating us about the communication problem with Mars Reconnaissance Orbiter. I get a sense that he was a little exasperated with the way the media portrayed the anomaly. He reassured repeatedly that there'd never been a problem with Phoenix and that this is the kind of thing they have contingency planning for.

He reviewed how the comm sessions work. They plan for Phoenix to have major comm sessions twice a day. In the morning, Phoenix gets its "uplink": commands from Earth for what to do that day. In the evening, Phoenix "downlinks" the data it gathered that day (or as much of it as it has time to downlink). The management team has quite a buffet of communications opportunities to choose from, because Mars Odyssey and Mars Reconnaissance Orbiter are both in polar orbits, so each passes within range of Phoenix for communication once every two hours or so. The management team chooses ahead of time which of these many "passes" is the optimal one for the morning comm session, and which is the optimal one for the afternoon comm session. Yesterday, it so happened that Mars Reconnaissance Orbiter had been chosen for both morning uplink and afternoon downlink. The uplink didn't work because of the anomaly, but the downlink did, so we have lots of new pictures on the ground. This morning's uplink was always planned for Odyssey, so that's moving ahead. Now, though, because they are still not sure what caused the anomaly with Mars Reconnaissance Orbiter's radio, they have changed their comm schedule to only use Odyssey for all comm passes until they resolve the problem on the other orbiter. This is not a big deal; it's an anomaly but not an unusual one, and they were prepared for it.

Okay, so that covers the management stuff. Next up was Mark Lemmon, who heads the camera team. That team actually benefited from yesterday's comm hiccup. Well, "benefited" is maybe too strong, but you can definitely say they made lemonade from lemons. When Phoenix didn't get its morning sequence as it expected to, it was prepared for that eventuality with what the science team calls a "runout sequence," what another of the media in the press room yesterday described as a "Honey-Do list." On Phoenix' list of things to do if it wound up with extra time was to start taking the many, many photos required to eventually build up a high-resolution color panorama of its surroundings. Here's the result of the runout sequence: 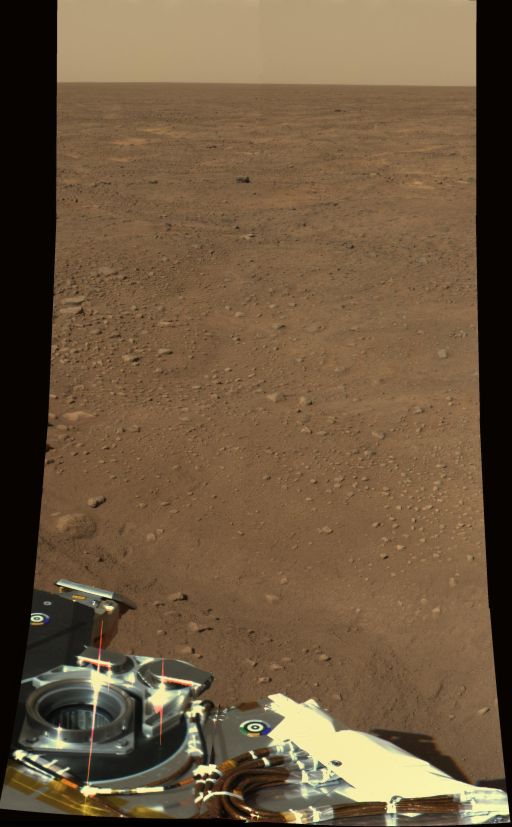 Phoenix captured this eight-frame color panoramic view of the terrain to the north-northwest of its landing site on Sol 2 of its mission, May 27, 2008.
They weren't actually planning on taking the color data so early. A higher priority is to just do a quick-and-dirty, black-and-white, low-resolution view of the entire 360 degree view around the lander. They have already completed one of three sections of this panorama, and the last two sections are scheduled for today. One of them is going to be taken before the afternoon communication pass, and one after, so the shadows will not all match up, but it'll be a good first look. So they will finish taking all the images for the first panorama today, but not all of the data will be downlinked today; the rest should come tomorrow. So the full panorama will be available no earlier than Friday.

This graphic shows the area around Phoenix that it has photographed to date. It's a polar projection, with the lander at the center and all 360 degrees of the horizon represented as a circle; north is at the top, south at the bottom, east at right, west at left. When Phoenix is done with its first panorama, you'll see a whole continuous doughnut of images around a gap at the center. The first day's postcard is just to the west of north, the L-shaped image. To its left, at about the 11 o'clock position, is the sol 2 "runout postcard." The panorama to the south was taken on sol 1, and contains the backshell in the distance. 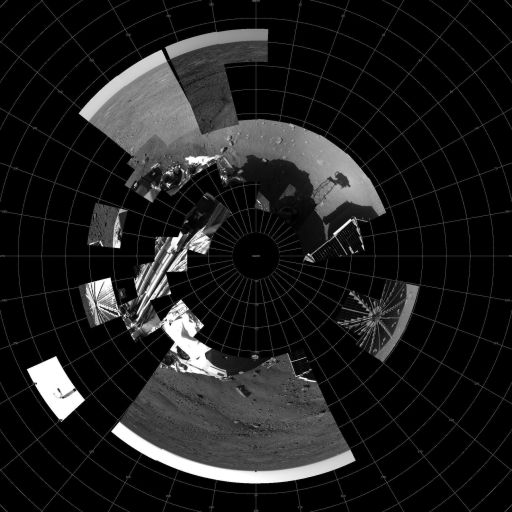 As of the morning of Sol 3, Phoenix had photographed only a fraction of its surroundings. The imaging team hopes to complete the initial reconnaissance of its landing site by the end of this sol. A full color panorama will take two to three weeks to complete.
Mark also showed a panorama of the "workspace," the area in which the robotic arm will be able to do its job. Unfortunately, that panorama doesn't seem to have been released. They did release a topographic model of the workspace, developed by using the stereo-vision capability of the camera. 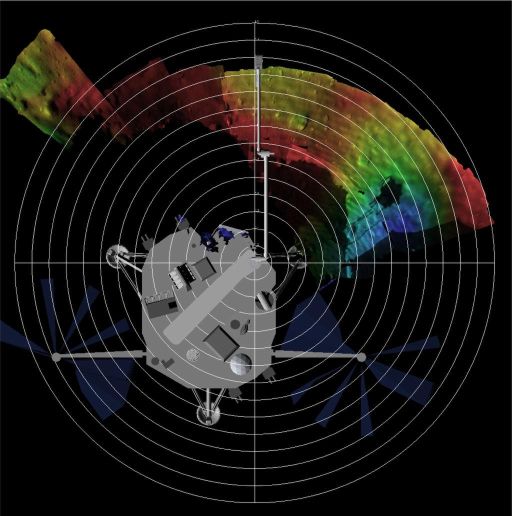 This is a topographic map of the area within reach of Phoenix' robotic arm. Red areas are low, and blue areas are high.
Mark explained that they are treating the workspace as a nature preserve; they are going to study it thoroughly using techniques that do not modify it, and then carefully select which areas they are going to modify by digging, and set aside other areas that are not to be disturbed. There are already names for a couple of the features in the workspace. You can see that the workspace contains troughs (red), and polygon centers (blue), a complete variety of the type of material that they wanted to sample. The main trough, at about the 1 o'clock position in this diagram, is called "Sleepy Hollow." To the left of Sleepy Hollow is one of the few rocks, which they are calling "Humpty Dumpty." To the right of Sleepy Hollow is another rock, "Headless." Mark said that they were probably going to use the area to the left of the 12 o'clock position as dumping ground for the soil that the scoop eventually digs. So, now, before digging, that is the area in which they are going to work first, take their first samples, and test their digging. He said that was particularly convenient because they'd be digging so close to their dumping area, and would not risk accidentally scattering dirt from the scoop across the rest of the workspace, which they are going to leave pristine for now. They have also designated two small areas, one behind (farther from the lander than) each of the two rocks I named, as "TECP preserves." Those are areas they will leave untouched, so that they can use the Thermal and Electrical Conductivity Probe to take repeated measurements of soil temperature and conductivity.

Finally, Robert Bonitz, who has the sweet title of "Robotic Arm Manager," gave an update on the plans to unstow the arm. He explained that the arm has four joints. The shoulder has two, one azimuth and one elevation joint. The elbow has one, but it's double jointed, bending both up and down. And there is another joint at the wrist, which actuates the scoop, and which can bring the interior of the scoop into the field of view of the camera that is mounted on the underside of the robotic arm.

Bonitz said that the arm is still stowed in its launch restraints. It is folded on the deck, secured in two places, one at the forearm, and one at the elbow. The unstow procedure is to tip up the bucket at the wrist joint, which will release the forearm restraint. Then it will swing the elbow (using, I think, the azimuth joint at the shoulder) to unpin the elbow restraint. Then it will step up the arm slightly; I can't remember if this uses the shoulder elevation motor or the elbow motor. And that's it for today's operations. The arm will still be parked over the deck, but it will be unstowed.

A couple of other things I forgot to mention about the runout postcard: at the very bottom edge, it just begins to get into the robotic arm workspace -- it shows part of the area that will eventually be the "dump." Also, it containts two (actually I see three) large rocks, emphasizing just how few of those there are in this landing site. And Mark mentioned that the team is working on comparing the HiRISE photo with this image to begin to map the locations of the nearby polygons, and he expected to see some comparison map released in a few days. Finally, the HiRISE team have released the other image of the landing site they took on Sol 1, which was not as good for seeing hardware as the sol 2 images released yesterday. This one was taken 11 hours after the landing and has much lower sun angle, so it brings the polygons into sharper relief.

For those of you who love the images, here's a great find: James Canvin, who has an excellent website devoted to color image of the rovers, has downloaded all the images taken by Phoenix to date, changed their filenames to match the format from the Phoenix SSI web page, and zipped them together, sol by sol, for your downloading pleasure. I don't know how long he'll keep this up, but as long as he does, it's a fabulous resource.