Here are some of today's images from Mars Reconnaissance Orbiter, showing Phoenix sitting squarely on the surface. (The coordinates of that spot I now know to be 68.218830N 234.250778E, using the IAU 2000 Areocentric coordinate system -- thanks, Tim!) Thanks to some helpers at unmannedspaceflight.com I can also point you to a "before" image of the Phoenix landing site, centered squarely enough on it that its narrow little bit of color data sweeps right across. What that meant is that I could put together this little blink animation showing the northern plains before and after the Phoenix landing. Fun! I did my best to match the "before" and "after" color levels, but it's not a very good job, I'm afraid.

Phoenix landing site, before and after

This animation blinks back and forth between a "before" view of the Phoenix landing site, taken on January 24, 2007, and an "after" view, taken May 26, 2008. The "before" view is from HiRISE image PSP_002328_2485, centered near pixel 16500, 8050 on the map-projected color image (near 18600, 12000 on the map-projected grayscale image).
Here is the wide view from HiRISE, showing all the hardware. I'm told the scale on this one is approximately 0.33 meters per pixel; in the press briefing this morning they said it was about 300 meters to the backshell and parachute from Phoenix. 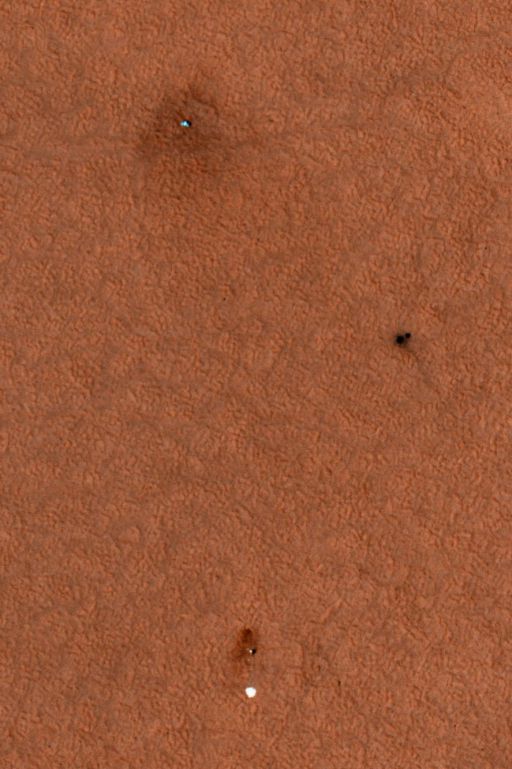 Mars Reconnaissance Orbiter caught this photo of the Phoenix landing site just 22 hours after the successful landing. The lander sits at the top of the image, amid a slightly darkened patch of dust; the darkening most likely results from the disturbance of dust by Phoenix' landing jets. At right center is a double black spot. One of the black spots is the heat shield, and one of them is a bounce mark from the heat shield. It appears that the heat shield is turned outside-up, so that we see the surface that was blackened by Phoenix' fiery entry. Near the bottom of the image is the backshell and parachute, with its own bounce mark. It is even possible to make out the twisted shroud lines connecting the parachute to the backshell. The backshell is about 300 meters away from Phoenix, and is visible near the southern horizon in Phoenix' panoramaic photos.
Here is Phoenix' view of that backshell and parachute. 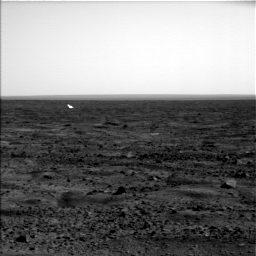 Backshell and parachute as seen by Phoenix

In this image, captured on sol 1 of Phoenix' mission on Mars, the backshell and parachute are visible as a white spot near the horizon. On the distant horizon, what appears to be a low line of hills is the boundary of the topographic valley in which Phoenix' landing area sits.
HiRISE sort of stole the show today, with its amazing photos, for which I feel a little bad for the Phoenix team! More on Phoenix to come...