The auditorium at the Jet Propulsion Laboratory was fairly empty for this briefing, held more than three days before the landing of Phoenix on Mars. I'd say there were no more than 20 reporters present. I expect it will get much, much busier by Saturday, and that it'll be a zoo on Sunday.

Fuk Li, the manager of JPL's Mars Exploration Program, described the entry, descent, and landing period as "a very nail-biting time for us." He went on to say that most of the operations that it will be doing over the next few days, are operations it has never performed before, and never will again. Things have to work correctly the first and only time that they happen. All of this, of course, is no different that for any other Mars landing. He gave a shout-out to his European colleagues for Mars Express also being in position to listen for Phoenix as it landed. He showed a really cool animation that displayed the orbital motions of all four Mars spacecraft involved -- Phoenix approaching for the landing, and the three orbiters, Mars Odyssey, Mars Express, and Mars Reconnaissance Orbiter. I couldn't find the animation on their press website, but they did have this still image that's pretty useful. It took a lot of planning to pull off this precise alignment of the three orbiters at exactly the same time that Phoenix was coming in for a landing. 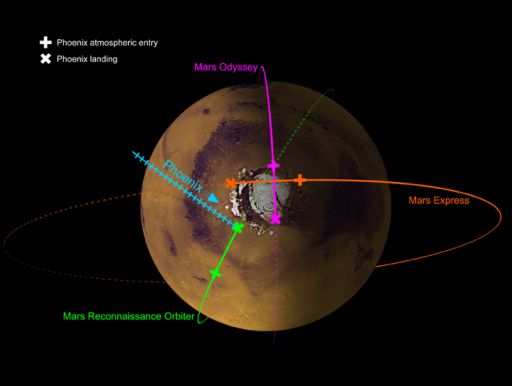 This diagram displays the positions of three Mars orbiters throughout the period of Phoenix' entry, descent, and landing on May 25, 2008. All three orbiters will be listening for Phoenix' signals; Odyssey will be relaying them straight to Earth, while Mars Reconnaissance Orbiter and Mars Express record the signals for later playback.
After Li finished, principal investigator Peter Smith gave an overview of the philosophy and goals of the mission. He mentioned several things that seem glaringly obvious to anyone who's followed the mission for very long, but as he said them I recalled that the vast majority of the public actually know nothing yet about this mission, what it's going to Mars for, and what it's going there to do. Those of you who read this blog probably know many of those things already, but your friends and family don't; so here's some of the facts that Peter Smith wanted to get across.

Phoenix is not searching for life. It is searching for evidence that there were ever habitable environments on Mars. Peter said, "Climate change on our planet is written into the ice in the arctic regions of our Earth. It's also where the history of life is preserved, in this ice. We're wondering if this is true on Mars. Where we land, there will not be liquid water. We're really trying to understand whether the ice has ever melted. We'll know that from the chemistry and the shape of the microscopic grains. In particular, we'll be looking for salts, because if there was ever an abundance of water associated with these soils, it would have evaporated and left salt behind. Searching for a habitable zone is one of our highest goals. But we're also looking for the geology and the properties of the soil."

Another issue that Peter addressed was the fact that Phoenix is a lander, not a rover. He pointed out that the mottled terrain of the northern plains, which is caused by ice expanding and contracting with the seasons underneath the soil, is really very similar from one place to another; there's not really any point to travel from one place to another. But in another sense, they are going on a journey, a vertical journey, from the surface down, as they dig their trench. Just as in the Arctic on Earth, a vertical slice through icy layers tells you about the history of the climate.

Ed Sedivy, the Phoenix spacecraft manager, reported on the health of the spacecraft. Everything is nominal and stable, he said. They recently topped off their batteries for the final time during cruise. The sequence of commands that will carry Phoenix from cruise to landing is already loaded into memory and executing in the spacecraft computer.

"We're getting to the hard part now," he said. "One of the reasons it is so hard is because we have two very different spacecraft. There's the spacecraft that gets us to Mars, protects us from the space environment and the heating during the landing phase. So then we need to evolve the spacecraft through a whole series of autonomous reconfigurations. We're in a cocoon, and seven minutes later we're out of the cocoon, and we're spread out like a beautiful butterfly with our wings exposed on the surface.

He pointed out that the amount of energy that Phoenix will dissipate as it decelerates through the seven-minute descent and landing is about 34 Megawatts. He said that's enough power for 210,000 homes; he looked up the data from the U.S. Census and found that Topeka, Kansas is about that size. So, if you could somehow recover the energy that Phoenix has to shed as it lands, it would power Topeka for seven minutes.

Sedivy pointed out that Mars landings are some of the hardest in spaceflight. To land on the Moon, there's no atmosphere, so you can do your whole landing as a "terminal descent," coming to ground on retrorockets. To land on Earth, the atmosphere is very thick, so you need a heat shield and a parachute, but the parachute slows you enough to land safely (if everything works properly). On Mars, there is an atmosphere, so you have to have the heat shield and parachute, but the atmosphere isn't thick enough to slow you down enough, so you also need to deal with the "terminal descent" phase with retrorockets, airbags, or whatever.

Then they opened it up to questions. Someone asked about the weather. Peter said that a few days ago there was a dust storm to the northeast and "we have decided that is downwind and unlikely to cause any problem on landing day. Opacity seems low and not of any serious concern. We have measurements from Mars Climate Sounder that show the density of the atmosphere is well within the normal range."

Someone asked whether the thrusters would melt the ice as Phoenix landed. Peter said that although the thrusters have a lot of power, they only reach the ground for a fraction of a second, and that it takes much more power than that to melt ice at temperatures as cold as the ambient conditions at the landing site.

In answer to a question about when images were going to become available, Peter said that they would be made available on the Internet as they come down. "You'll see them as I see them. We plan to operate the mission in an open manner." The first image, of the solar panels, should definitely come down in the first evening after a successful landing. Barry Goldstein, the project manager, clarified: "If everything goes perfectly, we will have the image of the solar array, we will have images of payload critical deployments, the footpads, and we will have a postcard image which would be a snippet of the horizon. If we don't have images [immediately after landing] it doesn't mean they won't be stored on the spacecraft already. They may come down in a 5 am Odyssey pass." That's 5 a.m. Pasadena time (12:00 UT) on Monday.

If the solar panels do not deploy, the spacecraft has 31 hours of battery power to live on while they try to solve the problem. If only one of the two panels deploys, the spacecraft will be "power-positive" and able to conduct a full science mission, though not quite as thorough a mission as it could do with both panels.

That's about it for today. I'll be getting a tour of mission control tomorrow, so I'll show you photos.