Mars24 is an extremely useful little Java application, written by Robert Schmunk at NASA's Goddard Institute for Space Studies. It provides map and text displays that show the local solar time and sol numbers for landed spacecraft on Mars. It's what I often use to figure out what dates correspond to what sols for the rover missions, and I use it every week to figure out what the Mars solar longitude currently is. I just got an email saying it had been updated (for the first time in years) to be able to display all of this information for Phoenix as well as for the rovers, Vikings, Pathfinder, etc. What that means right now is that I finally have a picture of where the Phoenix landing site is relative to other landmarks I recognize -- Olympus Mons, the three Tharsis montes, and, over there on the lower left limb, the landing site of Spirit. Download it yourself if you'd like to figure out what time of day it currently is at the Phoenix landing site! Phoenix will land at the spot marked with the tiny white plus symbol just below the polar cap. The other two dots on the globe are the sub-Earth point (blue) and sub-solar point (yellow) at the time of the Phoenix landing. 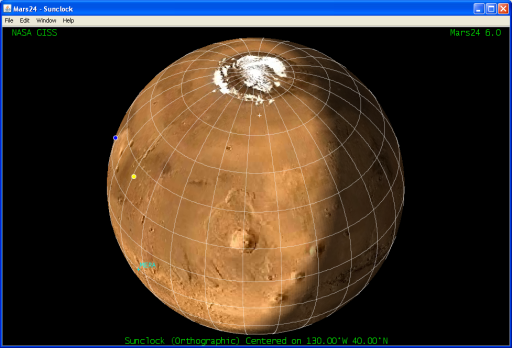 Mars24: View of the Phoenix landing site at landing time