It's time to check in on what's going on with our trusty robots around the solar system.

Cassini begins the week having just rounded its periapsis (closest approach to Saturn) on Rev 68, on the sunny (south) side of the rings. It crosses to the shady (north) side tomorrow and reaches apoapsis on Wednesday -- its orbits are now only 8 days long, and steeply inclined at almost 70 degrees. It crosses to the lit side and reaches periapsis again on Sunday. No targeted flybys or more distant approaches to the major moons will occur this week. Last week's raw images included numerous views from the "T43" Titan flyby last Monday, some distant global color mosaics of Saturn and its rings, a 42-frame movie of the F ring, a sequence of the rings occulting a bright star, some distant views of Janus, and some decent-resolution images of Tethys (see below). Last week's image releases included a shot of F ring shepherd Pandora, one of Prometheus and Daphnis in the same field of view, a closeup on the B ring - C ring boundary, one of an ongoing electrical storm in Saturn's southern hemisphere, and a neat shot of Tethys with the Odysseus impact basin making a flat spot on its limb. 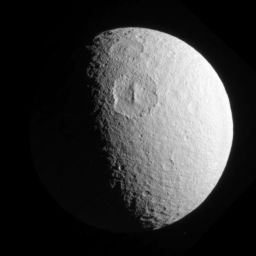 Cassini captured this view of Tethys from a distance of about 360,000 kilometers on May 18, 2008. The view is centered on the south pole of the moon. Melanthius is the prominent hexagonal-shaped crater at the center of the image, whose topography is brought into relief by the glancing light near the day-night boundary, or terminator. The hexagonal shape probably formed as a result of preexisting fracture patterns in Tethys' crust before the impact happened. The circular crater to the north of Melanthius is Dolius.
On the surface of Mars, it is late autumn in the southern hemisphere (Ls 74°), sol 1,555-6 for Spirit and sol 1,535-6 for Opportunity. Spirit is still parked on the edge of Home Plate, in the same position it has occupied since sol 1,464 (February 15), with its solar cells pointed northward toward the winter sun. Opportunity made some progress in diagnosing the arm problem last week: images now show that the robotic arm has been deployed successfully (see the animation below). Presumably they are now trying to figure out the best configuration for the arm when Opportunity drives, and then Opportunity has to resume backing its way out of a little sand trap. The May 14 weather update from the MARCI camera on Mars Reconnaissance Orbiter reported "uneventful" weather conditions around Mars in the previous week.

Testing out the motion of Opportunity's robotic arm

Over sols 1,531-1,532 (May 14-15, 2008), Opportunity's controllers successfully deployed its stuck robotic arm.
Images from the Mars Odyssey mission last week focused on recent modification to Mars' features, with another landslide photo and two showing landscapes modified by wind, as well as a shot of truly odd texture in the debris aprons of Deuteronlilus mensae hills and a view of the collapsed western flank of Jovis tholus. The Mars Reconnaissance Orbiter mission released views showing slope streaks near Olympus mons, scabby, duney plains in the Meridiani region, some beautifully jumbled blocky material within a crater south of Valles Marineris, a really cool photo of a wrinkle ridge with possible paleo-spring exiting from it (think I'll write about that one later this week), a neat view of some very odd surface texture within a fresh crater on Alba Patera, and a shot near the source of the Ares vallis outflow channel. The Mars Express mission released a photo and 3D views of a very strange collapsed region near Deuteronilus mensae.

At the Moon, Chang'e 1 and Kaguya are currently in orbit. Nothing new was released from either mission last week. At Venus, Venus Express is currently in orbit. Last week, the Venus Express mission announced the first-ever detection of hydroxyl ions (OH-) in Venus' upper atmosphere -- actually, they said it's the first time hydroxyl has been detected at any other planet. Its abundance was found to vary by as much as 50% from one orbit to the next. It's an important molecule because it is so reactive, tending to break apart other molecules in the atmosphere and contributing to its rapid, day-to-day changes.MESSENGER is cruising toward its second encounter with Mercury on October 6, 139 days away. It is 170 million kilometers from Earth and 114 million kilometers from Mercury. There was no new image today, unlike the past three Mondays.

Out in space, New Horizons is 8.98 AU from Earth and 21.67 AU from Pluto, approaching Saturn's distance from the Sun. Voyager 1 and 2, Dawn, Deep Impact, Hayabusa, Rosetta, and Stardust are all in cruise mode, talking to Earth from time to time; Genesis is in hibernation.