Another item from the "just plain cool" department: here is a website with a neat little application that shows the motions of bodies in our solar system: the Solar System Visualizer. You can just watch it spin and spin and see how fast we go around the sun compared to the outer planets, then zoom in and see how Mercury outpaces us. You can zoom to individual planets to see solar systems in miniature, and get a sense of how truly weird it is that Triton orbits Neptune backwards compared to all the other large moons and planets in the solar system. Then you can zoom elsewhere, following the menus to show you the orbital motions of planets in extrasolar planetary systems. My favorite aspect of this visualization is how orbital speed scales with zoom level, so you never need to fiddle with temporal controls. Kudos to the student team of Michael VanDaniker and Andrew Lund, who developed the visualizer with rings researcher Doug Hamilton as their advisor. Here's two screen caps, one of the whole solar system and one of the inner part of the Saturn system. 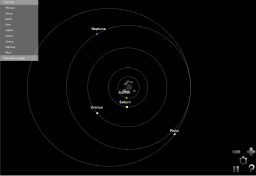 The Solar System Visualizer shows the solar system in motion, with bodies displayed at correct relative distance and speed (but not size).
A peculiarity of the site is that the planets and moons are dropped in at random locations when the simulation starts, so it is not representative of any actual point in time. Where that becomes most significant is in the comparative positions of the moons of the outer planets. Many of the moons of the outer planets have orbital resonances -- for instance, Io orbits Jupiter four times for every two times that Europa goes around and for every single Ganymede orbit. For another instance, several of Saturn's moons have co-orbitals, smaller moons in 1:1 orbital resonances that should be located exactly 60 degrees ahead and behind the moon. The relative orbital speeds are correct for all these moons, but the relative orbital positions don't work out correctly because of the initial randomized location. The same goes for the positions of Pluto and Neptune -- the two are in a 3:2 orbital resonance and never get anywhere near each other (which is what makes Pluto's orbit a stable one), but depending on where the randomizer places them at the start, they sometimes approach uncomfortably close. Still, peculiarities aside, it is a really neat simulation, extremely easy to use, with few controls, and I think would be a great aid for teaching about the orbital motions of bodies in the solar system.

Some fun things to watch for: zoom in to where you can see Mars and Earth, and see how often the two line up on the same side of the Sun. Keep track of where it happened last time, and where it happens the next time. Now do you understand why Mars launch opportunities happen 26 months apart? Zoom out to where you can see the outer solar system, and muse on how rare it is for the outer planets to line up with Jupiter a little behind Saturn, Saturn a little behind Uranus, and Uranus a little behind Neptune, to permit such a thing as a Voyager 2 grand tour. Look at how bodies at the same distance from the Sun in the asteroid belt can be going at very different speeds, depending on how elliptical their orbits are and whether they're near aphelion or perihelion or in between. See if you can notice how Mars' relatively elliptical orbit makes it go much faster at one part of its year than at another part.

I want to know about recent advances in Universe study