NOTE: An extended version of this update is now posted here.

By now, Planetary Society members should be very familiar with the Pioneer Anomaly: it's a very tiny but definitely detectable acceleration felt by the two Pioneer spacecraft as they exited the solar system, an acceleration that has so far been unaccounted for. But the study of the Pioneer Anomaly was hampered by lack of access to the telemetry and Doppler tracking data -- stored on degrading magnetic tape -- and by lack of interest (by which I mean lack of funds) from NASA to support the analysis. Planetary Society members have repeatedly come through with donations of funds to support both the data recovery and analysis, and JPL researcher Slava Turyshev just made a presentation to the American Physical Society on the status of one of those lines of analysis: the development of a thermal model of the spacecraft. 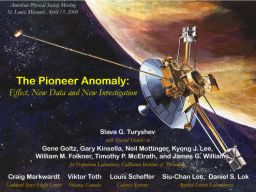 Del.icio.us - Newsvine - NowPublic
Why a thermal model, and what is a thermal model, anyway? The magnitude of the Pioneer Anomaly is so very tiny that it could conceivably result from the uneven radiation of heat from the spacecraft. The Pioneers, like all spacecraft, were made from a wide variety of materials: aluminum, Teflon, Kapton, Mylar, aluminum-based paints, and so forth, all of which absorb, reflect, or emit radiation in different ways; and some materials, notably the plutonium in the spacecraft power supply, generate heat on their own. To figure out in which directions the spacecraft radiates how much heat, Slava and his colleagues needed to start from scratch, building a CAD model of the spacecraft, covering the model with surfaces with the right thermal properties, plugging in the recovered spacecraft data on the temperatures measured at various points within the spacecraft, and then solving a beastly difficult set of differential equations to determine how heat conducts and radiates around within the spacecraft, and then in what direction it radiates once it exits the surface. If Slava wanted to do this for a modern mission, like Cassini, he'd have it easy; very nice CAD models already exist. But there was no model for the Pioneers -- just lots and lots of aging documents (some of which Slava rescued from NASA's Ames research center in 2006 just before they were to be disposed of), and lots and help from a few retired engineers who actually built the spacecraft.

To begin with, Slava decided to attempt to account for the thermal behavior of just one spacecraft (Pioneer 10) at just one point in time: July of1981, when Pioneer 10 crossed through 25 Astronomical Units from the Sun. (To orient you, this is midway between the orbits of Uranus and Neptune.) Starting at 25 AU allowed Slava to make some simplifying assumptions. At that distance, Slava told me, the pressure from solar radiation is negligible; the temperature from the Sun is not enough to change the state of the spacecraft; and it is so cold that the louver system (designed to radiate excessive heat away from the interior of the spacecraft) is closed. So they built their CAD model, plugged in the temperature sensor readings from that point in time, and then waited for their computers to finish chugging out the numerical solutions to differential equations modeling 3.4 million individual radiation conductors. And then, after two days of computations, the computer would tell them, oops, you forgot this parameter, and they'd fiddle with the model and start again. Several attempts later, they finally had their thermal model. 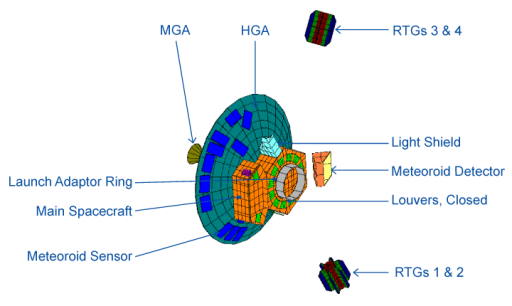 This computer model of the Pioneer 10 spacecraft was built by Slava Turyshev and his coworkers to model the direction and intensity with which thermal radiation is emitted from the spacecraft. Some parts, such as the booms that hold the magnetometer and power supplies and the struts that hold the radio transmitter above the dish antenna, are "thermally inconsequential" and so not included in the model. Courtesy Slava Turyshev.
Once they had their thermal model, they then needed to figure out what that model really meant in terms of accelerations it would impart on the spacecraft at that time. The fact that the spacecraft spins constantly simplifies this. Voila, the model predicted what Slava said he had been expecting all along: the thermal radiation is not isotropic (that is, the spacecraft doesn't radiate evenly in all directions); most of the radiation goes out the sides of the spacecraft, that is, in a direction perpendicular to its direction of motion. And because the spacecraft spins, most of those sideways radiation effects cancel each other out. But there is a little bit of a component of the radiation that does go out the ends of the spacecraft. And it turns out that just a little bit more radiation goes out the side of the spacecraft pointed away from the Sun than goes out the side of the spacecraft that goes toward the Sun. This is exactly the direction of the Pioneer Anomaly; and Slava reported that the model can generate an acceleration that amounts to about 30% of the Anomaly for that distance from the Sun. It's a good start.

What's next? Slava and his team showed their model off to a group of interested engineers (mostly outsiders to the project) at a meeting at JPL on April 4, and that group generated a list of recommendations for how to improve his model. Also, he needs to do sensitivity analyses -- that is, he needs to vary some of the properties of the materials on the surface of his model, to see how sensitive it is to unknown parameters. (An example of an unknown is: how has the emissivity of the aluminum paint on the surface of the spacecraft changed during its long exposure to the interplanetary radiation environment?) And then, once he is pretty happy with the model at 25 AU, he wants to run it for all distances sampled by the spacecraft (maybe in 5-AU chunks) to see how things change with time -- in particular, to study time-varying effects due to the spacecraft's distance from the Sun and the slowly decaying heat output of its plutonium electricity generators.

So this is just a progress report, but the progress looks good. We'll keep you posted as the analysis proceeds.

A final note: we are currently mailing a special appeal to all of our members to ask for continued financial support of this project. Your donations are just as welcome even if you're not a member! (By the way, when I went to that link just now it gave me a security certificate error, which is another manifestation of the website problems we've been having for the last couple of weeks. The transaction is secure, I promise; you may safely "continue to this website" even though it is "not recommended" by your browser. Again, I'm very sorry for these problems!)