As A. J. S. Rayl reported in her latest rover update, Opportunity is now driving toward Cape Verde, the steep cliff on Victoria crater's rim that borders the shallow ramp that the rover used to enter the crater. Cape Verde looks absolutely gorgeous from a distance, with beautiful layering. It's not clear how close Opportunity will be able to get -- the ground's tilt and shadows cast from the Cape will both decrease the power available to the rover -- but the closer it gets, the more detailed the view of those layers the rover will be able to obtain with its cameras. You can see how Opportunity is switchbacking down the slope in Eduardo Tesheiner's latest route map: 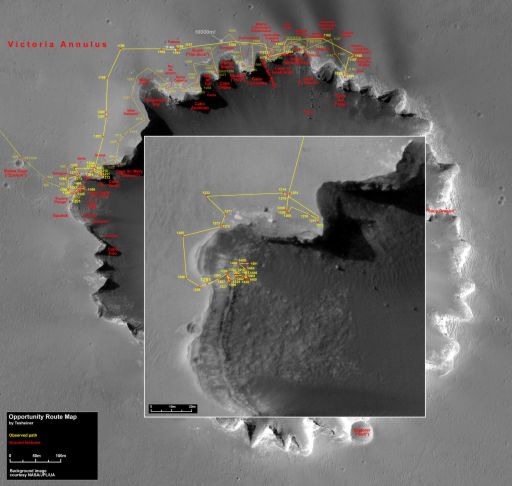 As of sol 1,491 (April 3, 2008), Opportunity was inside Victoria Crater, carefully approaching Cape Verde to its northeast.
The careful approach is being chronicled in detail, with more pictures, by Ryan Anderson over at Martian Chronicles (Ryan is fortunate enough to work, on and off, on the rover Pancam team). The weekend before last the rover captured the best panorama yet of the layers of Cape Verde, and it recently downlinked all the images required to build up the view. Here's a color version of the panorama constructed by James Canvin. (The wavy light and dark pattern is caused by dust accumulation on the Pancam windows.) 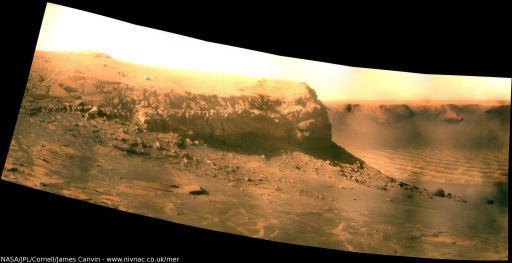 Now well inside Victoria Crater, Opportunity looked across the slope to Cape Verde, its next target. This version of the image is only half the full resolution; for the full-resolution version, visit James Canvin's website.
The driving ahead looks treacherous; Opportunity has run out of bedrock to drive on. There may be bedrock just millimeters below the dust that lies ahead, but there's no way of knowing how deep it is without testing, and the slope is going to make the footing treacherous for the rover. I guess they are going to have to advance very, very carefully. This approach may be very much like the scary creep that Opportunity performed in order to cozy up to Burns Cliff in Endurance Crater. If Opportunity succeeds in nosing up to the cliff it should result in an even more spectacular panorama. I'll keep you posted as Opportunity makes progress!

In this version of the "Burns Cliff" panorama, a synthetic view of the rover was dropped in to the image. Opportunity scrambled slowly across the steeply sloped wall of Endurance Crater to reach "Burns Cliff," a vertical pile of finely layered rocks that was irresistible to the rover sceintists. From this precarious position it captured a 7-color panorama from sols 287 to 294 (November 13 to 20, 2004). The bulging appearance of the wall is due to Opportunity's very close position to it; in reality the view spans about 180 degrees and the wall is gently concave. The simulated rover model helps put the wall into perspective. For the full-resolution image, visit the Mars Exploration Rover website.
For comparison, here's a simulation of Opportunity exploring Cape Verde. Cape Verde is both taller and steeper than Burns Cliff, so if Opportunity gets this close we'll have a panorama that crawls up the sky almost to the zenith. That's something to look forward to! 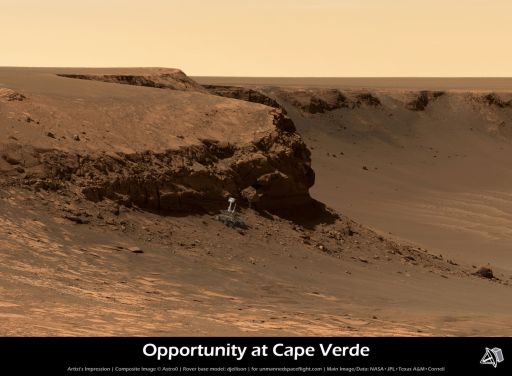