Now that space shuttle Endeavour has undocked from the International Space Station, there are three spacecraft flying in formation over our heads, a rare configuration, and because of the large size of ISS and its reflective solar panels it's usually pretty easy to spot. The third spacecraft is ESA's Jules Verne cargo ship, which is standing off of ISS, about 2,000 kilometers (1,600 miles ahead of it) in the sky. If you decide to go out and look tonight, Jules Verne will fly across the sky first, followed about four minutes later by the ISS and Shuttle.

Where and when to look? It depends on where you are, so you'll need to visit a website that can provide predictions for your location. Spaceweather.com has an exceedingly easy-to-use tool that allows Americans and Canadians to plug in their zip codes and receive text information about satellite flybys over the next few days; it tells you which satellites are flying by, when, and which direction to look for them. But if you're not in the U.S. or Canada, or if you'd like sky charts that show you more precisely where and when to look, go over to Heavens-above.com, set up a user account with your observing latitude and longitude, and you're all set. Heavens-above can even output information to an AvantGo channel for handheld devices.

I was wandering around looking for recent photos of the Space Station taken from Earth and I came across this stumper of a space photo, which looks an awful lot like an edge-on view of Saturn at first glance; but it's actually much closer to home, a long exposure of the Space Station transiting the crescent Moon last month. Cool. 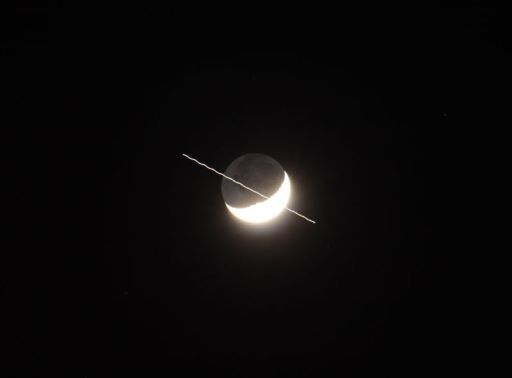 On February 11, 2008, the International Space Station crossed the crescent Moon as seen from an observing site in Europe.