The Enceladus flyby, in color

A reader who calls him- (or her-) self "spin zero" has contributed a slew of color versions of the images Cassini took during its Enceladus flyby last week, and I assembled them into a montage of the flyby. As with any color versions of Cassini images made from data taken from the raw images website, these are uncalibrated and artificially stretched. Translation: the real colors of Enceladus aren't what's shown here, but the trends should be the same. So things that show up as blue probably aren't really that bright a blue in color, but it's true to say that they are bluer than the stuff that shows up as white. 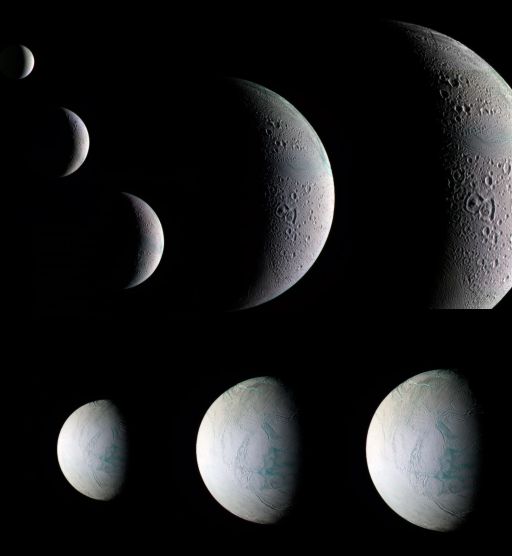 These eight images of Enceladus were taken at different times on either side of Cassini's March 12, 2008 flyby of Enceladus. The closest approach occurred at 19:06 UTC at an altitude of 52 kilometers. Cassini approached from above the north pole, seeing Enceladus in a crescent phase. The five approach images were taken from 612,000; 307,000; 225,000; 91,000; and 65,000 kilometers, respectively. The three departure images, showing Enceladus' southern hemisphere, were taken from 131,000; 144,000; and 213,000 kilometers, respectively. All images are composed of data taken through infrared, green, and ultraviolet filters, converted to RGB, and overlaid on the clear-filter images to sharpen them. The closest approach image is a mosaic, and color data was only available for the center part of the image.
Share this story!Send to a friend - Slashdot - Digg - Reddit
Del.icio.us - Newsvine - NowPublic
We already knew from previous Cassini imaging that the "tiger stripes" crossing Enceladus' south pole, which you can see in the bottom three images taken as Cassini departed, were relatively blue in color. With data from the VIMS spectrometer, it has been determined that the stripes are areas of more crystalline, and presumably fresher, ice than the surrounding areas; ice that has been exposed to high-energy particles loses its orderly crystal structure. But if you look at the pictures above, that bluish color isn't just showing up in the tiger stripes. It seems to show up along most, but not all, of Enceladus' linear features -- its dorsae (ridges), fossae (furrows), and sulci (ridges and furrows together).

One of the most interesting places, in my opinion, is one of the areas that was already mapped by Voyager, Samarkand Sulci. Samarkand is a place that has experienced some kind of tectonic disruption, but the exact nature of the geological event (or events) that transpired there hasn't yet been determined. Here's a closeup on spin zero's color view. 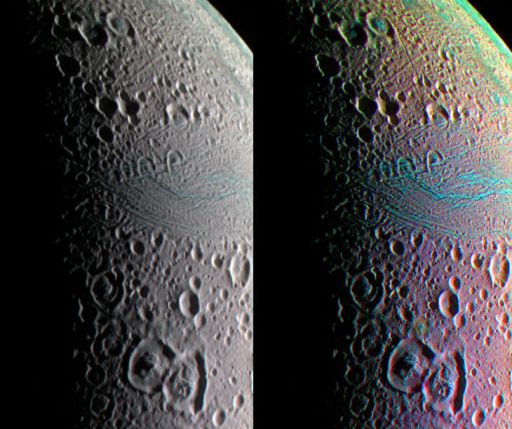 A color view of Samarkand Sulci, Enceladus, from the March 12, 2008 flyby. The right-hand version of the image has had its saturation increased to enhance color differences. Note the patterns in the "blue" material, which is often identified with fresher ice. However, care should be taken in the interpretation of these images, because the color filters were registered without the benefit of actual spacecraft pointing information; some of the apparent colors (especially near the limb) may result from misregistration of the different color filter images.
Now, before I go on, let me warn that you have to be cautious reading too much in to color images produced from raw data. There are bound to be registration problems -- where the three different images used to create the color view don't line up exactly, because they weren't taken at exactly the same time. Without looking at the color, one thing you can see for sure was mentioned in the caption originally provided to the Enceladus north polar mosaic: "Samarkand Sulci slices through some prominent craters that were seen in Voyager images. At that time, it was thought that the portions of the craters that extend into Samarkand were completely destroyed by whatever process formed Samarkand. However, Cassini images show remnants of the crater rims that have survived. This new insight provides a benchmark for measuring how tectonic processes modify older terrains, and will also help imaging scientists develop a more accurate timeline for the geologic history of these terrains."

But I'll tell you what I notice in the color data: look at Samarkand Sulci, and the patterns of blue within it. Notice that there's more blue near the outer boundaries of Samarkand Sulci than there is near its center. First of all, the fact that there's any "fresh ice" signature at all in Samarkand I find interesting; it makes me wonder how "fresh" Samarkand has to be -- ten million years old? A million? Thousands? I'm not sure how long it takes crystalline ice to become amorphous. Could Samarkand be active today? The other thing is that the freshest action seems to be at the outer edges of Samarkand. This is not what you would expect if Samarkand was forming like mid-ocean ridges on Earth do, where fresh volcanic material wells up from underground and all the most recent tectonic activity is focused at the center of the ridge. Instead, it matches more the idea of rifting, where you have some kind of regional extensional stress, and it starts by opening up a fissure in the ground, but as the fissure widens each side of the fissure collapses, and over time the area of collapse spreads outward from the original fissure, with the newest action happening at the edges. This is also consistent with the observation made by the Cassini team, that you can see remnants of dirupted craters within Samarkand. So Samarkand isn't new material, it's a recently disrupted piece of older surface.

I hope VIMS got a good look at the same area that the ISS camera system did. I'm also curious about a couple of colorful spots in the saturated version of the above image -- one crater, above Samarkand, that's suspiciously blue in its center; and another odd-looking rainbow spot just above Aladdin -- but there's no way for me to know from the raw data whether those colors are "real" or just artifacts. Needless to say, I'm looking forward to seeing what the geologists on the Cassini team have to say about the latest data from Enceladus!