A Georgia architect named Chuck Clark has been experimenting for several years with a technique called "Constant Scale Natural Boundary Mapping," a geometric method for making a two-dimensional map of a three-dimensional object that can be cut and folded into a reasonable representation of the actual thing. He'll be presenting his Phobos and Deimos maps (PDF, 650k), and his method, in a poster at the Lunar and Planetary Science Conference next week. He recently posted a new constant scale natural boundary map of Mars' moon Phobos, and I thought I'd give the assembly a try. Here's the map, which I printed onto a letter-sized piece of card stock: 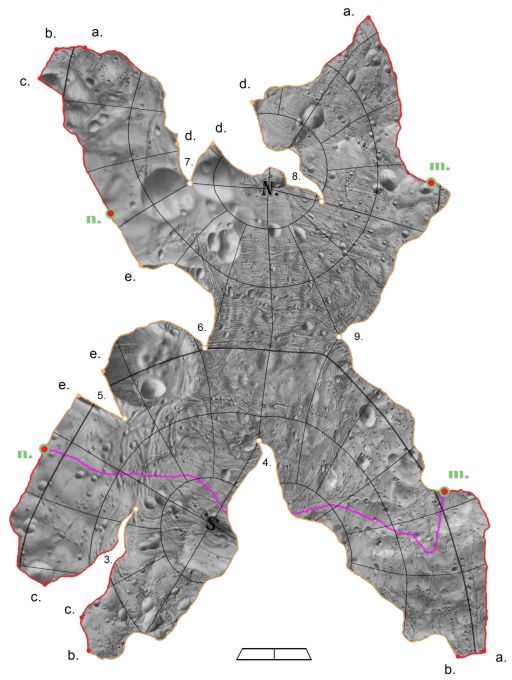 This map of Phobos can be cut out and assembled into a good three-dimensional representation of the odd-shaped moon of Mars. The map was produced through a technique called constant-scale natural boundary mapping, developed by Georgia architect Chuck Clark.
Assembly is a bit tricky but doable. What you have to do is:

To assemble Chuck Clark's constant-scale natural boundary maps, devise a system of tabs to which you can apply glue and/or tape to hold the seams together.
Here's how mine came together. I was working quickly, so it's not as neat a job as it might be, but it worked. 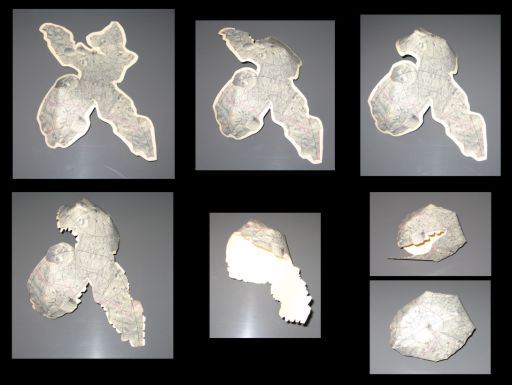 The result is pretty cool. It can be really tough to visualize the real shape of a lumpy world when all you have to go on is two-dimensional photos and flattened maps. Now I can hold Phobos in my hand and get a sense of its triaxial shape and how its appearance changes as you look at it from different angles. It also really helps to make sense of Phobos photos. Consider this iconic image of Phobos from Mars Express: 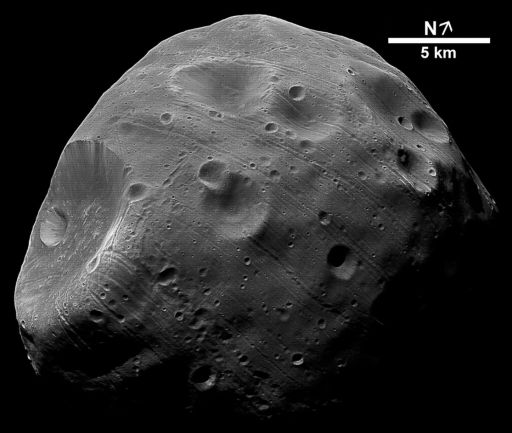 Phobos is likely a captured asteroid and is a tiny object measuring only 27 x 22 x 19 kilometers (17 x 13 x 12 miles) in size. The pixel scale of the enlarged view of this moon is only 7 meters (20 feet), nearly the highest ever achieved; and with the sharp vision of Mars Express' High Resolution Stereo Camera, the details are sharper in this image than in any previous one. The huge crater to the left side is named Stickney.
What part of Phobos are we looking at here? I always assume unless I'm told otherwise that a view onto a world sees a relatively equatorial view, but that turns out not to be the case. Stickney -- the great big crater at left -- does sit on Phobos' equator. But until I had my model in my hand, I didn't realize that most of what is in this view is actually Phobos' northern hemisphere, and the north pole is contained in one of the sunlit craters near the right side of the image.

In the photo below, I've rotated my glued-together model to match the viewing geometry. My thumb sort of traces out the terminator (day-night boundary) -- there's quite a bit of Phobos that we can't see in the Mars Express image because it was night there when the photo was taken. This totally does not match the mental model I had for the photo -- I'm going to have to try to keep my Phobos model from getting crushed and pull it out every time I see a new image! 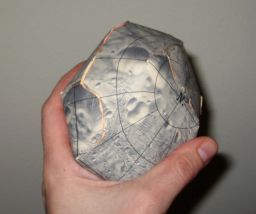 Comparing the Phobos model to a Mars Express image

Here, the constant-scale natural boundary model of Phobos has been oriented to match the view from an iconic Mars Express image of Mars' moon.
Clark's technique is really cool. Have a go at the map yourself, or have your kids try it out!

Was there also a paper model available for Deimos?