Before, during, and after avalanches on Mars

These are some amazing photos that I think pretty much speak for themselves. They contain billowing dust clouds tossed into the air just moments after an avalanche of dusty material cascaded down the steep slope at the edge of Mars' north polar cap. As usual for images from the HiRISE camera on Mars Reconnaissance Orbiter, I'm only showing you a tiny little bit of the entire image; you should visit the HiRISE website and use their "IAS Viewer" to check out and wander around the whole image and see what else you can find. 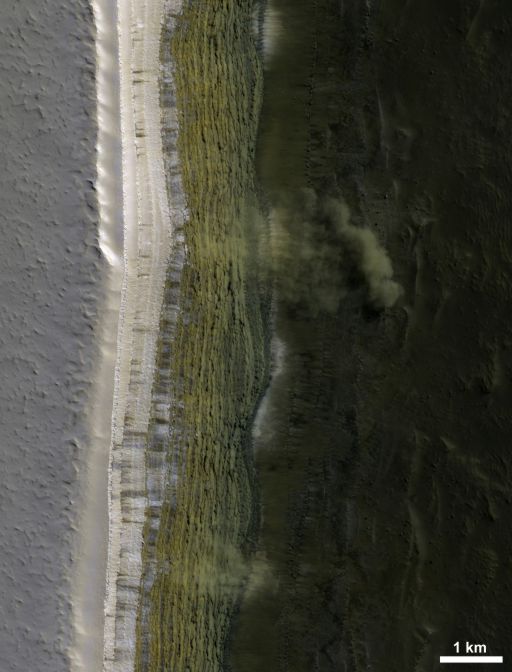 On February 19, 2008, while monitoring the edge of Mars' north polar cap for changes as the spring thaw arrives, Mars Reconnaissance Orbiter was fortunate to catch several avalanches in the act of spilling down the steep slope at the edge of the cap. Two avalanches are visible in this image, one large one near the top and a smaller one near the bottom. The cap is to the left; its steep cliff, running across the center of the image from top to bottom, is approximately 700 meters tall and reaches slopes as steep as 60 degrees. The steep part of the cliff is composed of layered material (the layers are difficult to see in this image) made mostly of water ice with atmospheric dust mixed in. To the right of the image, the cliff flattens out into a still moderate slope of about 20 degrees; this part of the cliff probably has a higher proportion of sand and dust in layers interspersed with ice-rich layers. The avalanches kicked up billowing clouds of dust that rise high into the air, casting shadows to their lower left.
That image shows two of the four avalanches the HiRISE team spotted in the full image; here's a third. 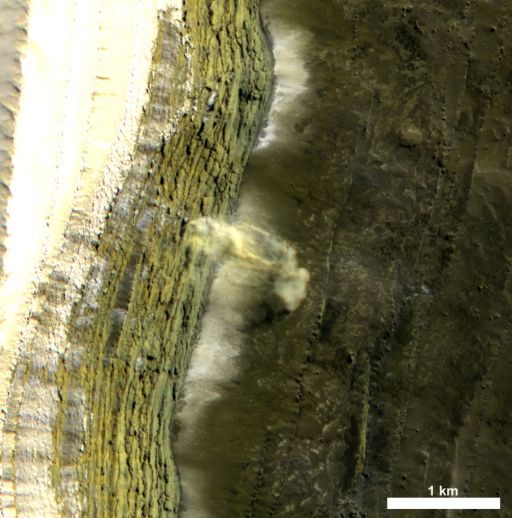 Finally, the HiRISE team also pointed out the existence of a "before" image, the same area seen just two weeks prior. What they didn't mention was that the "before" image also contains at least one active avalanche! Here's a blink comparison between the two. Because HiRISE was looking at the area from different directions to take the two images, I couldn't line up all the landscape features -- the very steep slope is much more foreshortened in the "before" image than it is in the "after" view. But you can easily see where there is an avalanche near the bottom of the February 3 image and one near the top of the February 19 image. (Thanks to Astro0 on unmannedspaceflight.com for pointing this out!)

Before, during, and after avalanches on Mars

This animation flips back and forth between two images captured two weeks apart of the edge of Mars' northern polar cap by the HiRISE camera on Mars Reconnaissance Orbiter. Active avalanches -- or their immediate aftermath, visible as billowing clouds of dust -- are actually visible in both images. The image is about 500 meters wide. The shift in surface features between the two images is because Mars Reconnaissance Orbiter had to look off to one side of its orbital position in order to image the same area twice. The cliff is more foreshortened in the February 3 image than in the February 19 image.
The polar cap is one place where Mars scientists expect to see changes happen every season, as the winter deposits of carbon dioxide frost (the white stuff in these images) ebb and flow. But I don't think they expected to see avalanches actually happen! It serves as a reminder that although Mars is quite a bit slower-paced than Earth, it still has active geology.