The MESSENGER team released another image from the first Mercury flyby today, including some of what I think is the most intriguing type of feature in their images: craters with dark halos. Here's the original photo, which was taken as part of the huge, 99-frame high-resolution mosaic of Mercury's visible disk as MESSENGER departed from the flyby (here's the view from the dynamic visualization showing the geometry). In addition to the two prominently dark-haloed craters, there are some very nice rupes or scarps crossing the center of the photo. 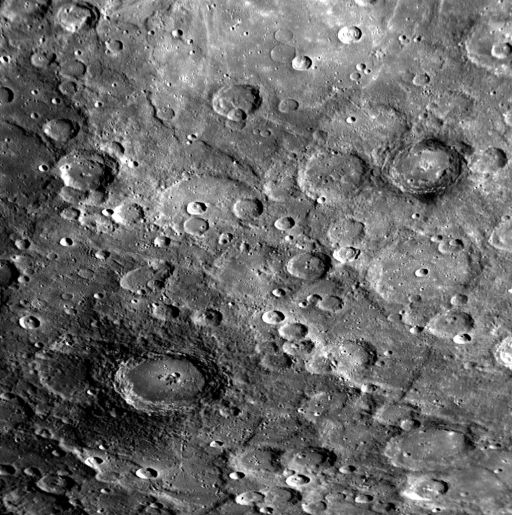 MESSENGER took this photo of Mercury as it departed from its first flyby at 19:59:41 on January 14, 2008 UTC. The image contains two craters with dark halos, which may indicate that Mercury's surface is layered, with different compositions at different depths. Alternatively, the dark halos could represent deposits of material that was melted during the impact; such materials are often darker in color than unmelted rock.
I was curious to see whether there was anything interesting to be learned by combining this image with the global color view that was released a couple of weeks ago. The two views -- high-resolution and color -- were taken far enough apart in time that overlaying them wasn't a simple task, and in the end I had to ask for help; Gordan Ugarkovic stepped up with this version. 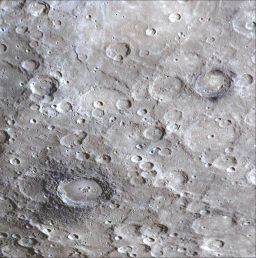 I think it's intriguing that the two dark-halo craters don't have quite the same color patterns. For one example, the smaller dark-halo crater, in the upper right, has a distinctly yellow center, while the one at lower left doesn't. Two explanations that come to mind are: there's a compositional difference between the crust at those two points; or maybe the bigger crater is newer and therefore bluer. (Stuff that has been exposed to space for a long time becomes reddish-colored as it experiences "space weathering," so fresher impact craters and their ejecta tend to be relatively bluer while older surfaces tend to be relatively redder.)

But there's lots of other interesting stuff going on in this image besides the dark-halo craters. Here's a few of my impressions, which should be taken with a grain of salt; I've sketched a diagram below. There are some nice bluish rays from a recently formed impact crater just off the top of the scene. Also near the top of the scene, I think I see a sinuous channel (yellow) emptying into a crater; if it's real, and I'm not at all convinced that it is, it's probably of volcanic origin, like the sinuous channels on the Moon. Also, there's a very interesting field of craters near the upper right of the image, four very similar-sized craters in which two are almost entirely flattened out (most likely by being infilled with lava), and two are in a fairly pristine state complete with raised rims and hummocky floors. Across the image, craters are show a broad range of degradational states, which reflects both their age (older craters will be more degraded) and local geologic events (some craters are filled in with lava, some aren't). One thing that will make the interpretation of Mercury's surface age very challenging is the fact that although older craters are more likely to be infilled, by virtue of their being around longer, every filled-in crater is not necessarily older than every non-infilled crater; a non-infilled crater could also be relatively old, a lucky survivor in an area that happened not to experience a lava flow. Finally, my eye tracks some intriguing relationships between topography in the intercrater plains and reddish color, but I've got no interpretation for what that might mean. 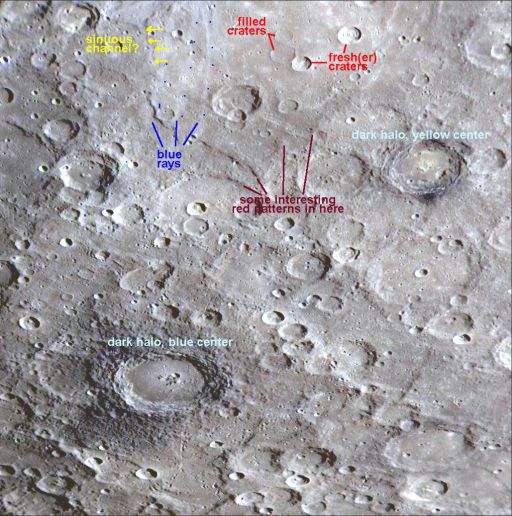 Some interesting things in a MESSENGER image of Mercury