Name a telescope in 25 words or less

NASA announced today the opportunity to suggest a name for the Gamma-ray Large Area Space Telescope. The spacecraft presently known as GLAST is scheduled for launch in "mid-2008," according to the release, and will study the universe in the high-energy, extremely-short-wavelength gamma ray portion of th electromagnetic spectrum. Gamma rays are sexy because they're only generated under the most extreme conditions; so GLAST will be used to study "supermassive black holes, merging neutron stars [and] streams of hot gas moving close to the speed of light..." The Planetary Society loves naming contests and has run them for many missions in the past, though we do not have any association with this one. Why do we like them so much? Because in order to suggest a winning name, contest participants need to have read about the mission and understand what it's about; it's a great way to offer a small reward that entices a lot of people (kids especially) to read about and familiarize themselves with an upcoming mission.

Unlike the naming contest held for Spirit and Opportunity, this one is open to people of all ages from all around the world. They also say it's not a "contest," in that there will be "no official winner" -- I'm not precisely sure what that means other than there's no prize. Perhaps it means they won't even acknowledge publicly the person or people who suggested the name they end up choosing? It may also offer them an "out" in that they can opt not to select any of the suggestions if nothing comes in that they like.

In addition to the name suggestion, you also have to submit "a statement of 25 words or less about why [the] suggestion would be a strong name for the mission." 25 words is pretty short, but enough for two haiku! Here's the other guidelines offered by the GLAST public outreach program, which, incidentally, is where the Bad Astronomer was working until he quit to write full time; I think I detect his voice in the guidelines. 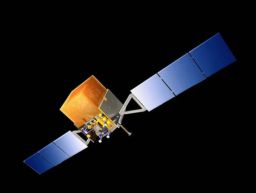