This is just a brief post as I'm hard at work on a lengthy story wrapping up the MESSENGER Mercury flyby. There is a steady trickle of images coming out from the MESSENGER mission, and one of the ones from this morning's release really tickled my imagination. In this view, taken as MESSENGER approached Mercury, we're looking across Mercury's limb at black space. I love the slanting perspective of photos across the edges of planetary disks, and the slanting light in this high-phase view makes it all the more dramatic. Here's the dynamic visualization for context.

This view of Mercury's limb against black space is part of a large mosaic of a crescent Mercury that MESSENGER saw on its approach to its first flyby of the planet, on January 14, 2008 at 18:10 UTC. The large crater at lower right was seen by Mariner 10 and named Sholem Aleichem.
Again, I am really impressed by how flat are the floors of most of Mercury's craters, as well as the plains separating the craters. Some craters are flattened almost to the point of unrecognizeability. See the smooth area just to the left of center of the image? If you stare at it long enough, you'll see that smooth area is outlined by a double ring to its lower left. It's a very ancient crater, almost obliterated by later craters and whatever process it is that smoothes out Mercurian crater floors; only about a third of its rim pokes above the plains.

I wanted to see if Mercury's craters really were unusually smooth, so I hunted down an image of the Moon with similar geometry to compare it to. I was looking for a crescent phase view that would have the same dramatic lighting as the MESSENGER Mercury approach images. Again, I'm grateful to the Lunar and Planetary Institute for their efforts to place the entire archive of Lunar Orbiter images online, because it contains a lot of treasures, including this lovely view of a crescent-phase Moon, taken from its far side. I prefer farside images of the Moon for comparison to Mercury, because the near side of the Moon is so completely covered with dark mare basalts that its geology has a totally different character to Mercury's. The lunar far side is much more similar to Mercury, at least superficially. 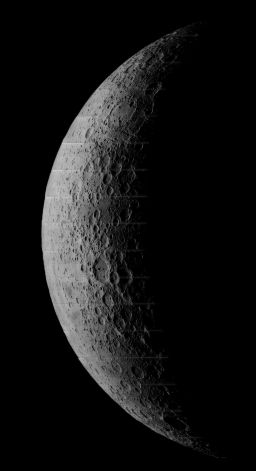 Lunar Orbiter 5 took this photo of the lunar farside in crescent phase in August 1967.
And here's a closeup of the northern edge of the limb, with roughly similar geometry to the MESSENGER one. 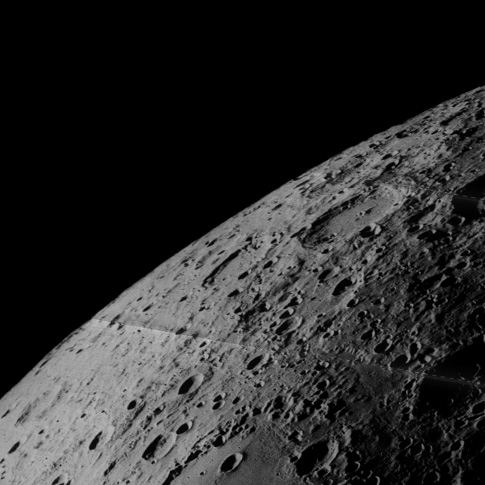 This image is cropped from a photo of the lunar farside in crescent phase captured by Lunar Orbiter 5 in August 1967.
I think the image of the Moon is qualitatively lumpier, though some craters do have very smooth floors. I suppose most of the difference can be explained by the difference in surface gravity between the two worlds; Mercury's gravity is (owing to its larger diameter and much larger bulk density) more than twice as large as the Moon's. (The Moon's gravity is about 17% that of Earth's; Mercury's is 37%.) Lower gravity allows a planet to support steeper cliffs.