Just a million kilometers away

Here's the latest photo from Mercury (see my previous post for the three images preceding this one). There are a lot more features visible in this photo than there have been in previous photos; MESSENGER is getting close enough to resolve featuresthat are the size of the craters peppering Mercury's ancient surface. 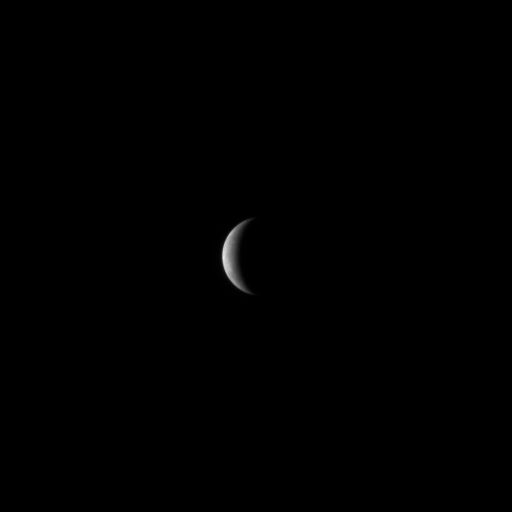 MESSENGER snapped this image of a crescent Mercury through its narrow-angle camera on January 12 at 09:06 UTC when it was about 1.2 million kilometers from the planet.
From MESSENGER's current perspective, everything that's sunlit in these images was seen by Mariner 10, so many of the features have names. Jason Perry created a simulated view of Mercury at the time of the MESSENGER observation using the Solar System Simulator, which gave him enough detail to figure out the names of a dozen or so of the craters.

MESSENGER is now well into its timeline of science observations, having turned away from Earth at 10:56 UTC. But stuff doesn't shift into high gear until tomorrow , just a few hours before closest approach. I'm not sure if the MESSENGER team has any more optical navigation images to show us -- there could be one more, perhaps, since they seem to be releasing these about a day after they were taken -- but after that there's going to be nothing until Tuesday, when the spacecraft turns back to Earth after executing the entire timeline.