This is just a note to those of you who are members, who should now be receiving your November/December issue of The Planetary Report. It contains a "Year in Pictures" article I wrote, which I hope you enjoy. Unfortunately, though, insufficient communication among myself, the editors, and our designer resulted in the wrong image being printed for one of the selections -- I enthuse for several paragraphs about the amazing mosaic assembled by the Cassini RADAR team of the north pole of Titan, but the image shows just one swath near the south pole. I'm really sorry about that mistake -- not just to you readers but also to the RADAR team, who were looking forward to seeing the mosaic printed in The Planetary Report. The correct image will be printed in the next issue, but in the meantime, below is the image that you should have seen. 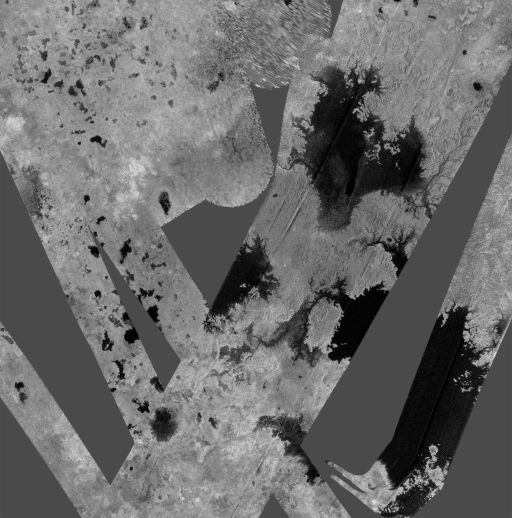 This mosaic is composed of all synthetic-aperture-radar maps of Titan's polar regions acquired by Cassini to date. It has been cropped and reduced in size by 50% from an even larger mosaic available here (JPEG format, 10 MB). Approximately 60 percent of Titan's northern polar region (poleward of 60 degrees north latitude) has been mapped as of October 2007, and of this area, about 14% appears to be covered with hydrocarbon lakes. The lakes appear dark in this image because the smooth, liquid surfaces reflect the radio waves away from Cassini. (If Cassini's radar were pointed straight down, it would see a bright specular reflection from the mirror-like surface, but when it captures data for synthetic aperture radar images, the radio beam is always pointed to the side, so lakes will always appear black in these kinds of images.) The image is a polar projection, with zero longitude (the sub-Saturnian hemisphere) toward the bottom. The leading hemisphere (centered at 90 degrees W) is to the left, and the trailing hemisphere (centered at 270 degrees W) is to the right. The largest lakes are clustered in an area on Titan's trailing hemisphere.
For those of you who aren't members, don't worry, my annual Year in Pictures feature, with 20 key images from this year, will be posted on December 26. (If you want to see my choices for past years, check out 2006 and 2005.)