Amazingly, only one reader has emailed me to point out a problem with this image, released by ESA on November 20. I didn't notice the problem either. Look carefully. 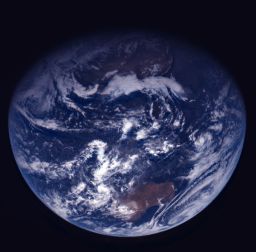 Rosetta Looks Back at Earth [DEPRECATED]

After its closest approach to Earth, Rosetta looked back and took a number of images using the spacecraft's Optical, Spectroscopic, and Infrared Remote Imaging System (OSIRIS) Narrow Angle Camera (NAC). This image, acquired November 15, 2007, is a color composite of the NAC Orange, Green, and Blue filters. At the bottom, the continent of Australia can be seen clearly.
Compare the image to one taken from a similar position in space by one of the five geostationary satellites that constantly monitor Earth's weather patterns: 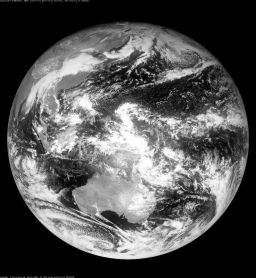 Himawari-6 is a geostationary satellite hovering over east Australasia at 140°E, providing continuous information on Earth's weather patterns. This image was taken near the time that ESA's Rosetta spacecraft was receding from its recent Earth flyby.
Figured it out yet? The image from Rosetta is flipped left-for right, a mirror image to what it should be. How did this happen? I asked the OSIRIS principal investigator, Uwe Keller, and he said that such mistakes are possible because how an image is displayed depends upon the software one uses to analyze and prepare the images, and they use several programs; it is a question of which corner of a displayed image is the first pixel located, what the orientation of the CCD columns are, and a host of other things.

Images don't come down from spacecraft in familiar formats like JPEG or TIFF; each instrument produces a data stream that is unique, different from previous instruments. Sometimes instrument teams write their own software to display images, but sometimes, especially if they are in a hurry, they may throw their data into some easier-to-use, off-the-shelf software package that doesn't necessarily know such details as the orientation of the columns of the CCD in the spacecraft camera. Ultimately, this particular mistake happened because, in the middle of a critical spacecraft maneuver, scientists were trying to squeeze in some observations of the planet that would be interesting to the public, and get them out there to the public as fast as they could -- an admirable goal that will occasionally result in a mistake or two. This one is easy to correct, anyway; here's my version of the Rosetta image of Earth, flipped and also rotated so that north is approximately up. 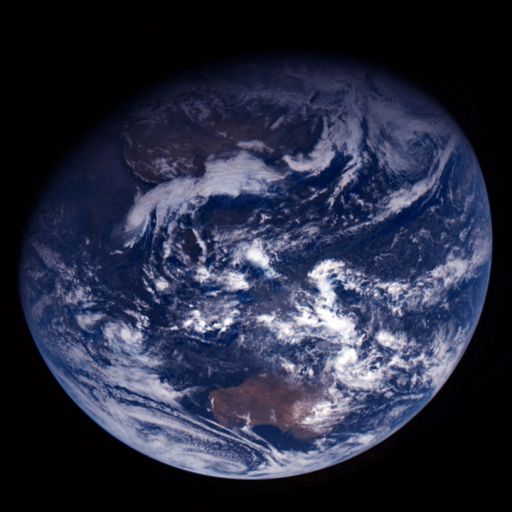 After its closest approach to Earth, Rosetta looked back and took a number of images using the spacecraft's Optical, Spectroscopic, and Infrared Remote Imaging System (OSIRIS) Narrow Angle Camera (NAC). This image, acquired November 15, 2007, is a color composite of the NAC Orange, Green, and Blue filters. At the bottom, the continent of Australia can be seen clearly.
Now that it's in the correct orientation, it's easy to spot some other land features, such as the curve of the steep front of the Himalayas at the margin of the Tibetan plateau, near the upper left of the globe. My sharp-eyed reader -- an Australian -- also pointed out the following features: "A nice sub-Antarctic low pressure system south of Perth (in western Australia); Cyclone Sidr (with well-developed eye) about to make landfall in Bangladesh, and Cyclone Guba spinning up near New Guinea; Lake Baikal in Siberia, outlined by snow(?) around its shores; and on Australia itself a modest zoom reveals the limestone surface of the Nullarbor Plain, the salt desert to the west of Lake Eyre, the wheat fields of southwest Australia, and some of our larger salt lakes. But I can't see my house ;-)"

I don't want to hear anyone being a Monday morning quarterback, criticizing Rosetta or ESA for the error! The way to avoid making such mistakes is to take more time for review; but, in this case, ESA's fast release of images allowed the public to ride along with the excitement of a critical spacecraft maneuver, and I think that was important. Presumably the OSIRIS team will have the kinks worked out of their procedures by the time they actually get to their mission targets -- asteroids and especially comet Churyumov-Gerasimenko.