Last week, Venus Express passed the two-year mark in space. That spacecraft only took five months to get to Venus orbit, which is just about as fast as you can make it to another planet, which means they've been taking data for more than a year and a half. To celebrate the birthday they released this image, which is composed of about a thousand separate Venus Monitoring Camera observations taken from April to August of this year. 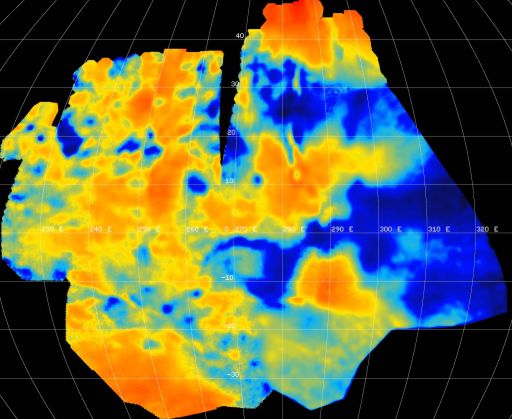 This map of the surface of Venus is a composite of about 1,000 individual Venus Monitoring Camera (VMC) images taken from April to August 2007. The images were taken at an infrared wavelength of 1 micron, at which Venus' atmosphere is somewhat transparent. The colors correspond to the apparent temperature of the surface; blue colors are areas about 40 degrees Celsius (70 degrees Fahrenheit) cooler than red-orange colors.
This picture illustrates some of the reasons that it's taking a long time to get science results out of Venus Express data. The image is really blurry, especially given how much data went into it. Venus' atmosphere is so thick, it's really efficient at scattering light, so the smallest features you can possibly hope to resolve on the surface are about 50 kilometers in diameter, which is pretty huge. The scattering makes light appear to come from all directions, so you don't see any topographic shading to help you figure out landforms The Cassini imaging team has a similar problem with a scattering atmosphere at Titan, blurring features and removing topographic shading, but it's not quite as bad.

Then the Venus Express team has another problem that the Cassini team doesn't face. We can see the surface of Venus in this image because we are looking at it using a particular wavelength of light -- about 1 micron -- in which the atmosphere is somewhat transparent. Unfortunately, Venus' surface is so hot that in addition to reflecting incoming sunlight at this wavelength, it also emits thermal radiation at this wavelength. Titan, by contrast, is much colder, so its surface would emit thermal radiation at much longer wavelengths -- I'm not sure exactly what wavelength, but it's probably between 10 and 20 microns. On Venus, as on Earth, cooler temperatures generally prevail at higher elevations.

Then there's a third effect: surface composition. If all of Venus' surface were composed of pretty much the same rocks, then this image would only show temperature-related effects. But if there is any variation in composition across the surface, then the brightness or darkness of any given spot will be related to its composition in addition to its temperature. In fact, there is compelling evidence from Magellan images of Venus taken in the early 1990s that there are compositional variations, particularly at the highest elevations. Iron-bearing minerals -- found everywhere throughout the solar system, and certain to be an important constituent of Venus' surface -- absorb infrared light at a wavelength of around 1 micron. 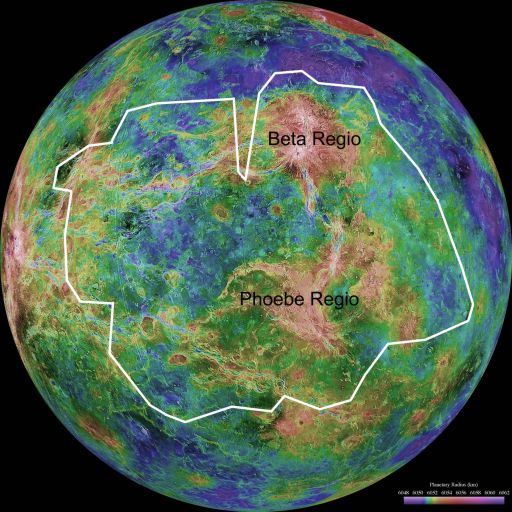 The white outline shows the location of an image of the Venusian surface captured by Venus Express from April to August of 2007. The base map is composed of Magellan images colored with topographic information; red areas are highest, green intermediate, and blue and purple are lowest in elevation. Small isolated mountains on this map -- showing up as red spots in the middle of blue plains -- correlate well with low-temperature areas on the Venus Express map.
Venus Express scientists are studying images like these to look for regions that are anomalously warm given their altitude, in the hopes of finding active volcanic centers. It is unknown whether Venus has currently active volcanoes or not, and finding a hot spot would be quite a coup. I'm waiting with bated breath for the first science results of the Venus Express mission, which should be published at the end of this month.