Last Friday the CRISM team -- that is, the Compact Reconnaissance Imaging Spectrometer for Mars, always abbreviated CRISM and pronounced "crizzum" -- released a large set of special image products designed to help the Mars community select the next MSL landing site. This is an amazing resource that will give Mars scientists an unprecedentedly detailed look at the chemistry and mineralogy of potential landing sites, and I hope that the CRISM team is getting appropriate thanks for the amount of hard work that has gone in to developing, calibrating, and releasing these data.

CRISM's mineralogical maps are especially important for MSL because Spirit and Opportunity provided an object lesson in the importance of using mineralogy, as seen from space, in selecting a landing site. Opportunity was targeted at an area that shone as a beacon of unique mineralogy from space, and it produced fantastic results within days of landing. Spirit, on the other hand, was targeted at a site that looked interesting based on geomorphology -- it looked like a dry lakebed from space -- but once they got there, they found almost no signs of ancient water activity until after the nominal mission was over and they had climbed into the Columbia Hills. So I think it is very safe to say that the MSL landing site that eventually gets selected is going to look "interesting" in CRISM images.

CRISM is a funny beast. It's kind of like a traditional space imager in that it achieves spatial resolution comparable to many past Mars cameras, getting down to roughly 20 meters per pixel on the Martian surface. But it's actually an imaging spectrometer, not a camera; it gets images at that resolution in as many as 544 different "bands," tiny slices of the electromagnetic spectrum. What those 544 different bands mean is something I always have a difficult time explaining to people who've never been introduced to multispectral imaging before. I've talked in this space about combining three different images taken through three different-color filters into color images. For most cameras, there are usually a handful, give or take, of different-color filters to choose from to make color images with. For CRISM, you can have anywhere between 72 and 544 different-color-filter images to choose from, depending on what mode they were operating in when they took their pictures. (Actually, CRISM doesn't use filters, but the basic idea is the same.)

It is really hard to figure out how to display all of that color information on a flat computer monitor. One grayscale image from CRISM shows us only one of those bands. If you make a color image, you get to use three bands, which still only shows you one percent of the "color resolution" of which CRISM is capable. This isn't a very productive way to display the richness of the CRISM data. A different way to go about things is to select a bit of the electromagnetic spectrum that's of mineralogical interest and perform calculations on many CRISM bands to produce image products that map that mineralogical signature on Mars.

These maps of a region in Mawrth Vallis, Mars, were created from data captured by the CRISM spectrometer on October 2, 2006. It covers an area about 13 kilometers (8 miles) long and, at the narrowest point, about 9 kilometers (5.6 miles) wide. At the center of the image, spatial resolution is 35 meters (115 feet) per pixel. The leftmost image shows the view in approximately true color; the second image is the same region in a set of infrared wavelengths. The right-side images are maps of areas whose spectral properties match the spectral properties of minerals as measured in a laboratory on Earth. The first spectral map shows the distribution of iron-rich clays; the second spetral map shows the distribution of aluminum-rich clays. The iron-rich clays correspond with a layer of rock that is dark red in the true-color view and bright gray in the infrared. In addition, CRISM found previously undetected exposures of aluminum-rich clay, in a rock unit that is buff-colored in the true-color view, and bluish in the infrared view. Both rock types formed early in Mars' history, about 3.8 billion years ago. The difference in clay mineralogy reveals differences in the environment in which the rocks formed. Those differences may mean that the environment changed over time, or they may mean that there were local environmental variations on small scales, over distances of a few kilometers.
As just one example, minerals that have been hydrated (they have interacted with water and incorporated water into their crystal structures) absorb electromagnetic radiation at a wavelength of about 1.9 microns. The stronger this absorption, the more abundant the hydrated mineral. There are tons of these absorptions indicating the presence or absence of different kinds of minerals -- that's the basis of the science of spectroscopy. So the CRISM team selected a few of these that were of most interest for choosing a landing site for MSL. Then they produced derived image products that are, effectively, maps of mineral distribution at the proposed landing sites. They've reduced the 544-dimensional complexity of their data set down into seven color "spectral summary products" that can be analyzed with the eye to determine the presence or absence, spatial distribution, and relative abundance of interesting minerals. Even better, they have done this in a way that is absolutely consistent across all of the landing sites being examined, so you can directly compare two images from widely separated spots on Mars and see which one contains more interesting mineralogical features.

Just for fun, here's a matrix comparing six of the seven derived image products for several of the high-priority potential MSL landing sites: Iani Chaos, North Meridiani, Terby crater, Eberswalde crater, Mawrth Vallis, and Nili Fossae Trough. For each of these sites, I selected the most interesting-looking set of CRISM images, and then I cropped out a tiny postage-stamp-sized piece of a CRISM image that contained the most diversity. Each of these stamps covers an area about 5 kilometers square. (The MSL landing ellipse is 25 by 20 kilometers in size.) I won't pretend that these selections accurately reflect the diversity of proposed landing sites; I was a bit overwhelmed by the fifty options being considered and just kind of randomly selected a few sites that I'd heard mentioned in talks yesterday. 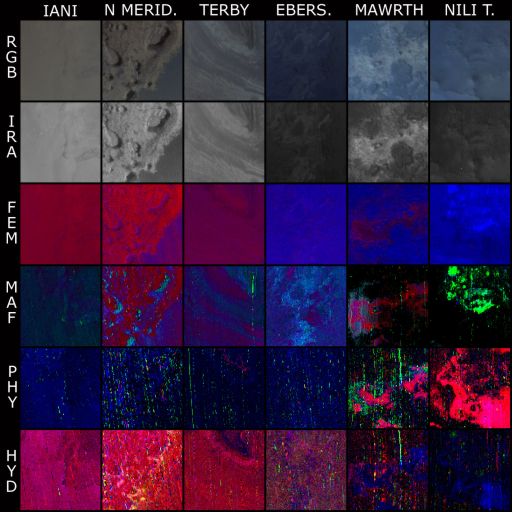 The three-letter codes down the side are the CRISM team's codes for the image products. The top two are albedo images, showing how the area appears in enhanced visible light (top row) and in the infrared (second row). The next four rows map different kinds of minerals. Black means the minerals are absent (or hidden from view beneath coatings or dust), while brighter color indicates higher abundance or larger crystals of particular minerals. "FEM" and "MAF" map different kinds of iron minerals, while "PHY" and "HYD" map phyllosilicates (clay minerals) and other minerals, usually but not always sulfates, that contain water.

Iani is of interest because there have been hematite and sulfate minerals detected there. Meridiani has layered rocks that are mineralogically interesting. Eberswalde and Terby have interior layers and delta-like deposits that seem geomorphically interesting. Mawrth and Nili are "phyllosilicate" sites, where clay minerals are present.

I made a couple of false starts at trying to explain what all the different colors popping out in these images mean, but I wasn't making much sense and anyway, I decided, that wasn't the point. If you want more information on what each of these images means, I strongly suggest you check out the CRISM website. I will mention that the bottom two rows look kind of noisy, because, as principal investigator Scott Murchie told me in an email, "they represent ratio-like functions with the bejeepers stretched out of them." For instance, the bright shouting red signature in the Nili Trough PHY image tells you that there are iron-magnesium phyllosilicate minerals present, probably the result of volcanic rocks being altered in the presence of water. But the signature of these iron-magnesium phyllosilicates is only a subtle downturn in the spectrum at a wavelength of about 2.3 microns, making the bright shouting red areas only about 1.5% more absorbing than the non-red areas. Bringing out such a subtle signal requires stretching the data so much that noise is accentuated too.

There are two main points that I think you can take away from looking at these little thumbnails from possible MSL landing sites. First, some sites (Mawrth Vallis, Nili Trough) have more mineralogical diversity than others (Nili Chaos, Eberswalde crater), and one of the things I heard repeatedly yesterday at the opening of the MSL landing site selection meeting was that diversity is good; we want to send our one rover to a place where it can sample as many different paleo-environments as possible.

The second thing is that selecting one of these or the other forty-odd proposed landing sites from all the rest will make a very great impact on what kind of mission MSL will have. I guess Spirit and Opportunity have already demonstrated how important landing site selection is to the type of science data you get back from the mission. I will be very curious to see what the scientific community finally decides is the best place to send the rover -- assuming they have a choice, that is. For Spirit and Opportunity, the choice was pretty much made for them because the engineering constraints wound up narrowly confining the rovers' options. MSL is supposed to be a more capable landing system; we'll have to see if, after all this work, the scientists wind up having a big role in the choice of where to take the next rover.