Observing Dawn from Hawaii and Alaska

A brief launch update: They're still "go" for the morning of September 27, with, currently, a 40% chance of weather being bad enough to scrub until the next day.

People in Hawaii and Alaska get to observe dawn every day of course (though many Alaskans are losing that privilege as we head toward winter), but on Thursday they may get to observe Dawn crossing their skies. Here's what you lucky Alaskans and Hawaiians need to know. I hope that some amateurs will go out and look for the spacecraft, because any accurately measured sightings from amateurs could be of great assistance to the team, especially if something goes wrong during launch.

As Marc wrote in his last Dawn Journal, (with some modifications for the one-day launch delay),

Even before the navigation team gets a good fix on Dawn after launch and enters the trajectory data into HORIZONS, observers in Hawaii may get a view of Dawn's early light. With a launch on September 27 at the opening of the launch window [11:20 UTC / 01:20 HST], the spacecraft will exit the shadow of Earth 1 hour 20 minutes after liftoff (2:40 am Hawaii-Aleutian Standard Time, or HST). At that time, the spacecraft will not yet have deployed its solar arrays, so it may not be very bright, but its relatively small size at that time should be somewhat compensated for by its relative proximity to Earth. It will be about 68° above the horizon when it comes into the sunlight, and will pass directly overhead 13 minutes later.

Dawnophiles in Hawaii, Alaska, and the Pleiades may be treated to a particularly attractive alignment shortly after that. As viewed from the first two of those locations, Dawn will appear to pass less than 1.5° north of the center of that familiar star cluster at about 3:11 am HST when it is less than 18,000 kilometers (about 11,000 miles) from the surface. (Note: "it" refers to Dawn. The Pleiades, in contrast, will be more than 430 light years from Earth, or more than 200 billion times farther than Dawn.) By then it likely will have opened its solar arrays, presenting a much larger target for the Sun to illuminate.

Observers are advised however that, depending upon the spacecraft's progress in the many steps described above, the arrays may already be pointed straight at the Sun by the time it transits the Pleiades, so the reflection would not be directed toward Earth. The Dawn project is confident no one's eyes will be damaged from direct exposure to this view; indeed, the spacecraft may be quite dim. It is possible however that before the spacecraft has completed aiming its panels at the Sun, terrestrial spectators could see a brief bright reflection or "flare," a phenomenon familiar to amateur satellite observers. We will not know until we receive reports from witnesses. Here is a diagram of Dawn's expected path in the sky for a September 27 launch: 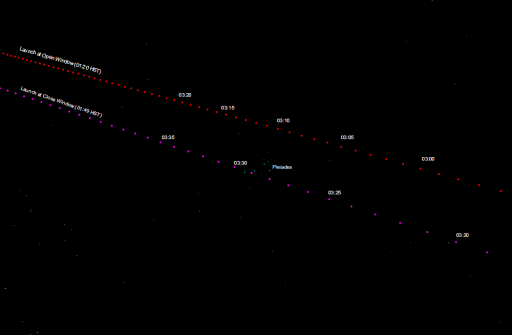 Viewers in Alaska and Hawaii may be able to see Dawn pass by the Pleiades in the early morning hours after launch on September 27, 2007. Dawn's position in the sky will depend in part on when in the 29-minute window it launches. If it launches at the beginning of the launch window, it will follow the red path in the sky, passing above the Pleiades at about 3:11 a.m. HST. If it launches at the end of the launch window, it will follow the purple path, passing just below the Pleiades at about 3:28 a.m.
And here's a table of data describing the trajectory for the open and close of the launch window for observers at Haleakala and Anchorage. Because the spacecraft ephemeris won't be in JPL's HORIZONS system yet by the time this observing opportunity takes place, you'll have to do your best to figure out where to look based upon your observing position and what you know of the launch time. Best of luck!