A former college classmate, Mark Andrews, emailed me a couple of weeks ago saying, he was working on a new PBS production on stargazing amateur astronomy, would I care to preview and review it? It is "Seeing in the Dark," based on Timothy Ferris' 2002 book of the same name. In brief, I definitely recommend it; check your local PBS' station's listings to find when and where it airs. (It'll be on Wednesday the 19th at 8:00 Eastern / Pacific for most PBS stations.) 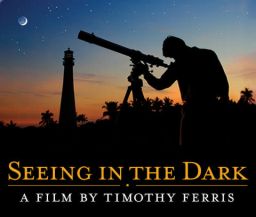 I watched it over the weekend with my husband, who I drag in to watching space-science-related shows I'm reviewing because he doesn't already know most of the facts in them. But, this time, I needn't have bothered; the show covered a world that I knew existed, but knew little about. It features the remarkable capabilities of amateur astronomers to explore the skies, produce glorious images, and actually contribute to science. There have always been amateur astronomers contributing to science, but there has never been a time when such advanced equipment has been so easily available to so many. 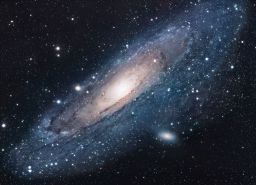 This stunningly detailed color mosaic of the Andromeda galaxy was captured by amateur astrophotographer Robert Gendler. It required almost 90 hours of exposure time, and the full-size original image is 21,904 x 14,454 pixels in size (one Gigabyte!). The version here has been downsized by a factor of approximately seven.
The show is more about the people doing the stargazing than it is about the stars. It features a dozen or so amateurs, coming from all walks of life; there are doctors, a musician, a teacher, and also former Minnesota Vikings running back Robert Smith, who is really excellent on camera; he needs to be tapped for more public education projects. This was one part of the film for which my husband really perked up, which was an object lesson in the education value of someone like Smith to catch the attention of otherwise bored viewers.

Face-to-face interviews give you a view into their enthusiasm. The people featured in the show are transported across space and time as they play with their telescopic toys. Yet most of them really do observe from their backyards, some of them from fairly light-polluted backyards. One of my favorite scenes showed one of the amateurs going out at night and mounting a stepladder to throw a barbecue grill cover over a street lamp located annoyingly close to his backyard observing location. ("His neighbors must hate him," my husband remarked.)

The show makes the point that although astronomy is not a cheap hobby, it is certainly within the reach of many thousands of enthusiasts. For the kind of money that many people will spend on a motorcycle or boat for weekend fun, you can outfit yourself with a pretty fancy home observatory, or even one sited in a dome in a remote dark-sky location that you can control from the comfort of your own home. As a little stunt for the show the Bisque brothers (hardly amateurs) see how fast they can set up and install a working remotely operated system in one such dome in New Mexico. The answer: three hours. Once set up, you not only get to see beautiful objects in space -- planets, galaxies, open clusters, and nebulae were all featured in eye-catching images -- but you can actually get involved in science, participating in observing campaigns to catch the afterglow of gamma-ray bursts, search for extrasolar planets, and track potentially hazardous asteroids.

Refreshingly, the production relies almost entirely on real film footage and stills, going to special effects only when no actual images will do (for instance, to show an animation of a supernova producing a black hole). The production seems to employ some of the same stillness that sky watchers enjoy; there is none of the quick MTV-like cutting from image to image that has become so distressingly common on television.

There was only one sour note: I could have done without the obviously scripted scenes involving Timothy Ferris and his son. It made for a nice story arc, and Ferris' own lifelong interest in astronomy was clearly important to his ability to produce the book and film, but Ferris just wasn't able to pull off the acting performance. It was the only thing that rang false in a show that was otherwise about people's true love for the stars.