Cassini just passed the periapsis (closest approach) of its 50th orbit around Saturn. Fifty orbits! I should have celebrated. But Cassini, workmanlike, is just continuing on its way, heedless of milestones. Just after periapsis on August 29, it accomplished three flybys: first Tethys, at just over 50,000 kilometers; then, on the 30th, Rhea, at only about 5,000 kilometers; and finally, today, Titan, at 3,300 kilometers. When the images from these flybys are returned to Earth, they'll be the first new ones Cassini has sent back in nearly two weeks, because Saturn has been in practically the same spot as the Sun in our sky for that period, a condition known as solar conjunction. Actually, some of the Rhea ones are already down and posted on the imaging team's website; I've heard they may not show up right away on the JPL website.

During solar conjunction -- defined as when the spacecraft (and Saturn) are within 5 degrees of the Sun -- the spacecraft can operate normally, except that any radio transmissions it attempts to send to Earth experience serious interference from the Sun's radio emissions. So, during conjunction, the Cassini team scaled back science operations, since they would not be able to radio the results of the science work to Earth, and also to avoid any risk from issuing commands to the spacecraft during a period when two-way communication is impaired. (On top of the interference problem, conjunction is also when Saturn is farthest from Earth, so that signals are weakest and the travel time for signals is the longest.) The Cassini team did, however, perform an experiment with the radio subsystem to send signals through the Sun's corona to Earth. This experiment had two goals: study of the Sun, and an assessment of how well Cassini's transmissions were able to be received on Earth through the Sun's interference. 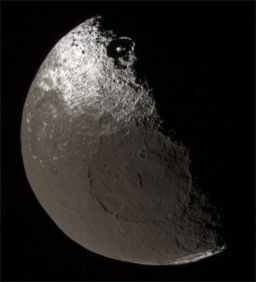 A composite of red, green, and blue images from Cassini's November 12, 2005 approach to Iapetus shows two of the giant impact basins in Iapetus' dark Cassini Regio. The crater on Iapetus' day-night boundary is named Roland. The view is principally of the northern and leading hemispheres of Iapetus.
With today's Titan flyby past, Cassini is now swinging out to Iapetus, for a flyby that will occur on September 10, 2007. This flyby was very difficult to set up -- meaning it was costly in terms of fuel -- because Iapetus is Saturn's most distant large satellite. It orbits three times farther from Saturn than Titan does. On top of that, Iapetus' orbit is significantly inclined, tilted at an angle of 15 degrees to Saturn's ring plane. So getting Cassini out to Iapetus at the right time and the right inclination to visit the moon was tough; consequently, this will be Cassini's only close flyby of the moon. On the plus side, because Iapetus is so far from Saturn, it's moving slowly, and Cassini will also be moving slowly during the encounter, so they will get almost 40 hours of high-resolution science data.

I'm putting together a detailed timeline preview of the encounter, which I plan to post next week. But for those of you who would really like to dig in to the details of what the science team is planning, I heartily recommend you check out the website put together by imaging team associate Tilmann Denk of the Freie Universität Berlin. There is an unbelievable quantity of detailed information on camera pointing, resolution, filter choices, exposure times, etc. etc. etc. Check it out! He told me he has a few more things to add to it, but there's an overload of information there already.

In the meantime, here's a preview of where the camera will be aimed throughout the flyby. It's an animated gif, 811 k in size (the image below doesn't animate, follow the link for the animation). You can see how the camera will be covering the moon throughout the encounter as the spacecraft travels toward it and rotates to bring its other instruments to bear. I can't wait for the diagrams to be replaced by the real images!