The last time I posted photos of Phoenix was two months ago, and they've made a lot of progress since then, preparing for their launch.

First, here's a neat photo from about a month ago, when they were showing off Phoenix to the media. We're looking at the underside of the spacecraft, so you can see the three footpads (white circles) and the twelve thrusters (currently capped with red plugs) that represent Phoenix' landing system. 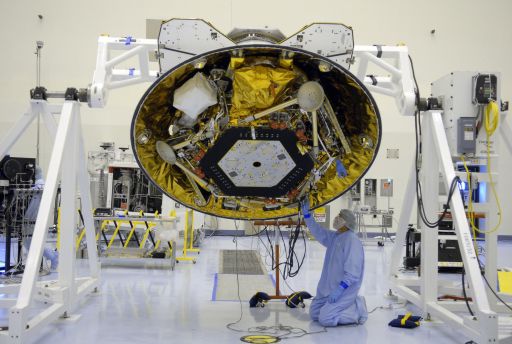 The belly of the Phoenix

On June 26, 2007, photographers were treated to a view of the Phoenix Mars lander, encased in its backshell. The view is of the underside of the spacecraft.
Here, the spacecraft has been flipped over, and is being lifted onto its upper stage booster. This was a week ago. 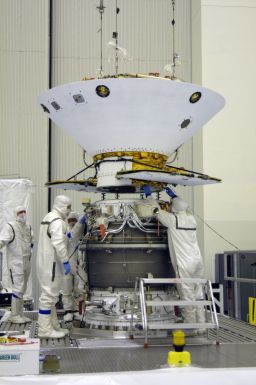 Phoenix is mated to its upper stage booster

In the Hazardous Payload Processing Facility at Kennedy Space Center on July 17, 2007, the Phoenix Mars lander is guided on to its upper stage booster.
Two days later, on the 19th, they topped the stack off with the heat shield. 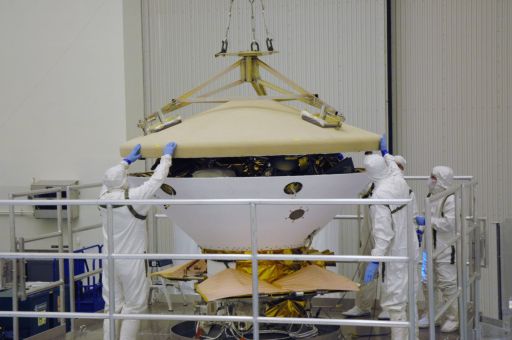 Mounting the heat shield onto Phoenix

In the Hazardous Payload Servicing Facility, workers guide the heat shield onto the Phoenix Mars lander. The heat shield will protect the lander and slow its descent into Mars' atmosphere.
With that, all of the indoor work on Phoenix was completed, and it was time to transport the spacecraft to the launch pad. But transporting the spacecraft any distance, no matter how short, requires very careful packing. This seems a little odd, given the tremendous shocks and forces that the spacecraft will endure during its launch, but those shocks the spacecraft was designed for; it was not designed to survive, say, tipping over and crashing sideways to the ground. So they have to pack and handle the spacecraft very carefully when they move it. I think it's amusing that they refer to this step as "canning" the spacecraft. 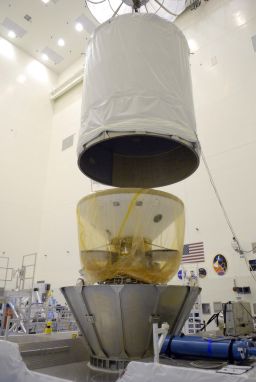 On July 20, 2007, in the Hazardous Payload Processing Facility at Kennedy Space Center, Phoenix is prepared for transport to its launch pad. The spacecraft has been mated to its upper stage booster, wrapped in protective plastic, and placed atop one half of a shipping canister. The top of the shipping canister is being lowered to cover the spacecraft.
Yesterday, Phoenix met its rocket:

Lifting Phoenix to the top of the mobile service tower

In the early morning hours of July 23, 2007, Phoenix (encased in a protective shipping canister) is lifted to the top of the mobile service tower at launch pad 17-A at Cape Canaveral Air Force Station.
Less than two weeks remain until the launch! Launch is scheduled for August 3 at 5:35:18 a.m. EDT (09:35:18 UTC, and an ungodly early -- or awfully late -- 2:35:18 a.m. PDT); if that launch window doesn't look good, they can try and reschedule for half an hour later, 6:11:24 a.m. EDT, before scrubbing to the next day. Here's a table of the launch times throughout the launch period, which came from NASA via Spaceflightnow.com. I've converted the times to UTC to help you calculate your local time. (Don't know your offset from UTC? My favorite website for working through time zones is timeanddate.com.)

Meanwhile, at the other pad, the entire process was proceeding in reverse for Dawn.

According to the captions posted with these images at the Kennedy Space Center Media Archive, Dawn's new launch period is from September 7 to October 15. According to my calendar, September is also when Chandrayaan-1 (the Indian lunar mission) is supposed to be launching, though I haven't heard an update on that lately. [EDIT: This date is wrong. It's going to be at least April 2008 before Chandrayaan-1 launches, and most likely not until the summer. I'm now working on finding out more about this. --ESL] And rumors seem to indicate that the delayed launch of Kaguya (the Japanese lunar mission) may also happen that month. Rockets launching everywhere!