The 2007 Martian Dust Storm: Crisis for Some, Opportunity for Others

I should have posted about this earlier, but real life intervened. You may have heard that there is currently a dust storm at Mars. As long as you're orbiting safely above the storm, this is merely of academic interest. But if you're roving below it, the storm is causing some rather serious problems. I spent the last week conversing with people working on all five spacecraft at Mars -- three orbiters and two rovers -- to find out what's going on with the dust storm.

Probably the most striking item I received this week was this image, which Jim Bell was kind enough to share with me. It's been even darker for Opportunity since the last of these images was taken. 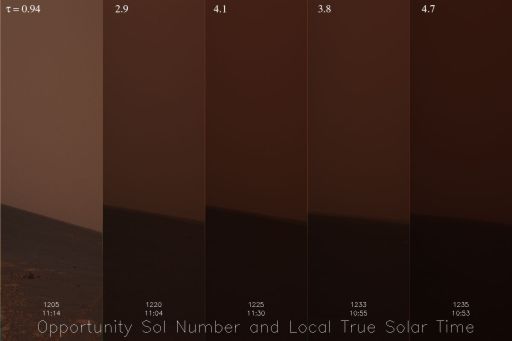 The 2007 dust storm seriously darkened Opportunity's skies, robbing it of solar power. These images are made from calibrated radiance data, so they show the correct relative brightness of the scene that Opportunity observed as the storm developed. The sky is less than half as bright in the last frame as in the first; the ground is 40% as bright. The images for this sequence were taken on sol 1205 (June 14, 2007), 1220 (June 30), 1225 (July 5), 1233 (July 13), and 1235 (July 15). After the last of these images were taken, Opportunity was forced to halt imaging -- and most other operations, including regular communication with Earth -- to conserve its battery power and ride out the storm.
People seem confident that the rovers will make it through this. Still, I can't help but feel concern for the rovers, hunkered down as they are beneath dark skies, with no shelter from the storm.