I've just posted some new movies made by the Mars Climate Sounder team on the team's website, which we host here at The Planetary Society. Mars Climate Sounder is not a camera, so it can be tough to visualize what their data means. Now, instead of static graphs, you can see how Mars Climate Sounder builds up a 3-D view of what's going on in Mars' atmosphere, as Mars Reconnaissance Orbiter circles the planet in its 2-hour orbit. There are two movies, representing data from different times of year, and you can see how features in Mars' atmosphere have shifted with the seasons. I don't think the Mars Climate Sounder team knows yet what changes happen every Mars season, and what changes have more to do with the kinds of chaotic weather patterns that we're so familiar with (and, often, still can't predict) on Earth.

To explain what the movies show, it might help you to look at the update on the Mars Climate Sounder instrument status that I posted earlier this year, which included a bunch of graphs that looked like this: 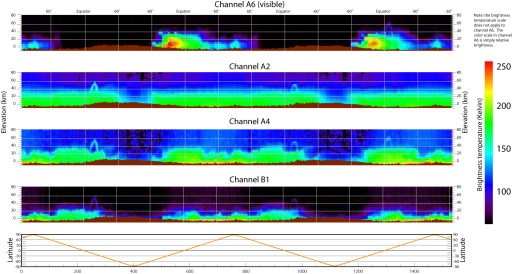 This graph shows data from four of MCS's nine channels for a four-hour period starting at 12:00 UTC on October 6, 2006. Each channel surveys the Martian atmosphere vertically from about -10 to +80 kilometers above the ground (-6 to +50 miles). For the three infrared channels, A2, A4, and B1, the data is plotted as "brightness temperature," where black and blue represent the lowest brightness temperatures, and yellow and red the highest. For the visible channel A6, the data simply represents relative brightness. The data comprises slightly more than two orbits; the graph below the MCS data shows the latitude at which the measurements were taken. Mars Reconnaissance Orbiter is in a nearly polar orbit, so the spacecraft travels nearly from pole to pole. The plots begin near the north pole, where it was late summer. The most obvious feature common to all four channels is a region of low brightness temperature as Mars Reconnaissance Orbiter flew near the south pole, where it was late winter.
Each of these plots shows about two orbits' worth of data, but it may not be easy for you to see where on Mars the data was supposed to have come from. The new movies I just posted show you exactly where Mars Climate Sounder was looking as it stared forward along its orbit to view Mars' atmosphere, with Mars spinning underneath it all the while. Here's a still from one of the movies: 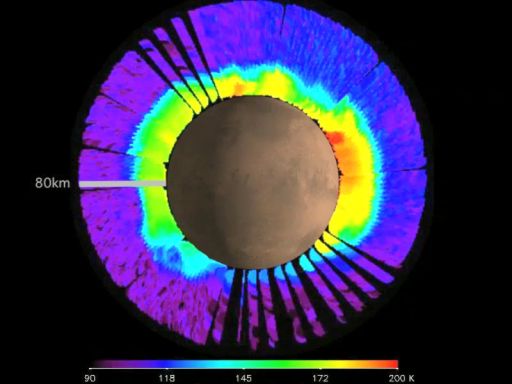 This image is a still from an animation showing the spatial context for limb scans made by Mars Climate Sounder on October 1, 2006, when Mars was in late northern summer (Ls 114). Visit the Mars Climate Sounder team website to download the movies and read more about them.
Unlike Mars Reconnaissance Orbiter's other instruments, particularly the HiRISE camera and CRISM spectrometer, the Mars Climate Sounder team doesn't get instant gratification from their data. The quicklook plots are a first step to visualize what the data means, orbit by orbit. These movies help place that data in spatial context. Eventually, the team will develop models that will enable them to construct four-dimensional (three spatial plus one temporal) data sets on the pressure and temperature in the Martian atmosphere, as well as the distribution of dust, carbon dioxide, water, and other important atmospheric constituents; but those higher-level data products are still many months, possibly years, from completion. And even when they're done, they'll only show us a relative snapshot of Mars' weather, covering just one Mars year. Just consider how much the weather varies from year to year where you live, and you'll understand why this is just the beginning of our investigation into Mars' weather.