I was browsing through the Cassini raw images website today and came across the images necessary to create this neat view of icy, gray Rhea transiting Saturn's yellow globe, captured by Cassini on Friday: 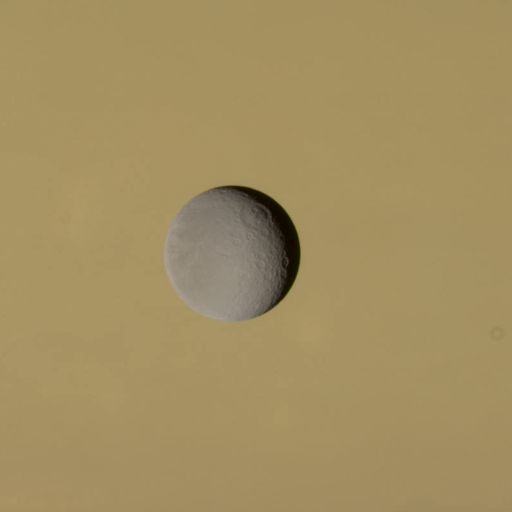 To create this image, I took Cassini's red, green, and blue filter images of the subject and aligned and merged them into one RGB image. Cassini also took two clear-filter images at the same time. I stacked those and overlaid the RGB version on the stacked clear images to try to make the whole thing a little sharper. At this resolution, Saturn looks pretty much featureless; its vast cloud patterns totally dwarf its moons.

I frequently make color composites of Cassini images, and I thought it was about time I tried to explain how to do that. I've put together a tutorial on how to create RGB color images using Adobe Photoshop. Please try your hand at it -- it's a fun way to bring spacecraft images alive. I'd appreciate feedback on this tutorial -- does anything need to be explained more? Are there any missed steps or typos? -- and once the text seems to make sense, I'll try to put together the same tutorial using a free piece of software, most likely ImageJ. 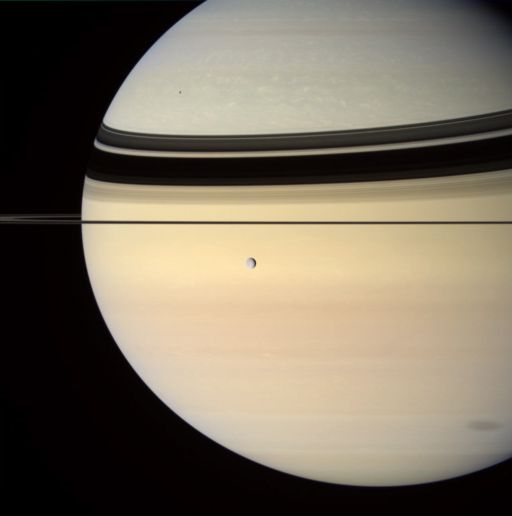 In the center, you can still see gray Rhea against Saturn, but the wider field of view contains a lot more action. The equator is marked by a thin dark band, a highly foreshortened view of Saturn's ring system; with Cassini's return to an orbit within the ring plane, we won't be seeing much of the rings, for a while. The rings do cast shadows on the northern hemisphere; these shadows are dropping in latitude as the seasons proceed toward northern hemisphere spring. Above the ring shadows is a tiny dark dot, a shadow cast by one of Saturn's small moons, I'm not sure which one. To the lower right of the image is a dark smudge, a shadow cast by Iapetus, Saturn's outermost large moon. Iapetus is way off the image, orbiting 3.6 million kilometers from Saturn (three times farther away than Cassini's observing position). And yet, there's its shadow.