This week, I'm attending the IAA Planetary Defense Conference in Granada, Spain. The conference brings together many of the world's experts (150 to 200 people) in near Earth objects (NEOs). Over the course of the three and a half day conference, there will be presentations and discussions about detecting, tracking, and characterizing NEOs, assessing the threat to Earth, and techniques for deflecting a space rock if we find one headed our way. There will also be some follow-up on the legal implications and whose job is it to protect us, a topic which was covered much more thoroughly at the Lincoln, Nebraska conference that Planetary Society Executive Director Louis Friedman attended last week.

Random Space Fact: Did you know you have more chance of dying from asteroid impact than from shark attack or botulism? So, deadly asteroid impact is a low probability, but not lower than some of the other things people worry about. On any given day, we are all pretty darn safe. But, without intervention, asteroid impact will happen, and it will kill people, it is only a matter of time. That time frame may be tomorrow, though more likely it is measured in decades or centuries. Recall that in 1908, an impactor exploded over Tunguska, Siberia leveling thousands of square kilometers of forest. If such an impact occurred over a populated location, it could level a city. Or, more likely, it would occur over the ocean and cause catastrophic tsunamis.

These points and others were made during the opening session, including a presentation by the first Spanish astronaut, Pedro Duque. Duque emphasized the importance of public and political awareness of the NEO threat. 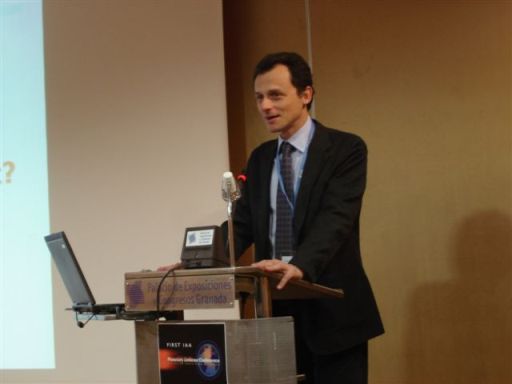 'll briefly report some of the highlights and interesting tidbits of the conference. For more detail, check out the conference website, which including the abstracts for the presentations.